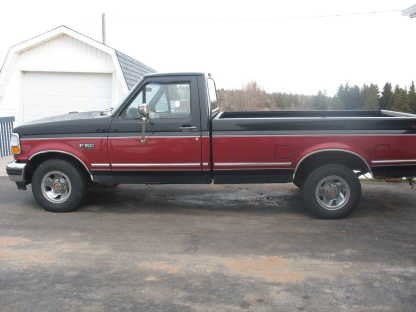 Safety and luxury were the hallmarks of the 1994 Ford F-150; this year's model was the first in the line to be offered with a driver's side airbag, as well as a CD player.

Power was another big selling point; the 94 Ford F-150 came off the line with a choice of fuel-injected 5.0 liter Windsor V-8 engine, 4.9 liter straight-six with fuel injection, or an IDI turbo-diesel V8 with a huge 190-horsepower output.

Trim lines for the 1994 Ford F150 were the XL, XLT, and XLT Lariat. Extended-cab supercab and 2-door cab setups, as well as short-bed and long-bed models, added to the variety offered to buyers of the '94 Ford F150. The solid durability and reliability of this workhouse truck made it a great choice for farm and ranch; its rugged 4-wheel drive lent it popularity with off-roaders, and its heft and chunky style makes it a favorite with tuners and project addicts today.

16 views with 2 answers (last answer about a week ago)

old FORD F-150 - with engine off, pumped brakes many times. Kept foot pressure on brake pedal and started engine. Brake pedal sinks considerably (inches). Is this alone enough to conclude that the bra...

Truck Will Start When You Turn Key But Quits When You Let Go Of Key Whats W...