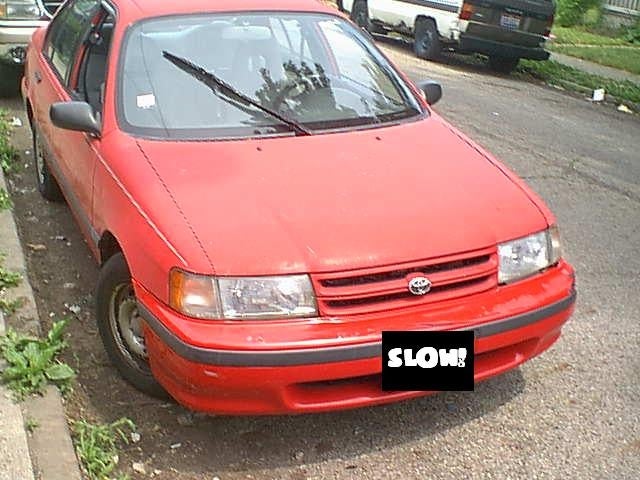 The 1993 Toyota Tercel, which was actually initially introduced as a late â€™92, saw a number of significant changes. For the first time, a driverâ€™s side airbag came standard and anti-lock breaks were an option. Toyota also replaced the driverâ€™s side seatbelt with a traditional height-adjustable three-point seatbelt, although the front passenger still got the old configuration, with a separate lap belt and shoulder belt. The 1993 Tercel also got a redesigned grille, steering wheel, and a warning buzz when the headlights were left on.

The 1993 Toyota Tercel came in four trim levels. The coupe was offered as a base or DX (deluxe) model, and the sedan was available as a DX or LE. All shared the same 1.5-liter, 82 horsepower four cylinder engine. Not surprisingly, the 1993 Toyota Tercel got excellent gas mileage, at about 30 mpg in the city and 35 mpg on the highway. The base models only came with a four-speed manual transmission, while the DX and LE models also had the choice of a three-speed automatic.

Drivers love their 1993 Toyota Tercels because they are cheap and reliable, and that is all they seem to want out of their cars. Drivers applaud the Tercelâ€™s excellent gas mileage and ability to start in all kinds of weather. Some owners do say that the coupe can be difficult to get in and out of, and some have had rust problems.

Have you driven a 1993 Toyota Tercel?
Rank This Car

My Blinkers Stay On When I Have My Headlights On On My 1993 Toyota Tercel. ...

My 1993 Toyota tercel right blinker wont turn off from the rear It'll just stay on and not blink and the front doesn't turn on at all when I have my headlights on but its only when I have the par...

Car Reveled Up And Then Loss Power And Ran Hot A Little And Would Not Shift...

do i need to change the computer ?

Any ideas where I can find a new ac control/stereo area "bezel" (Believe Toyota calls it the lower dash panel)? It's the squareish plastic surround for the ac and stereo contorls and it has a hole fo...

What is the gear level or amount for a 1993 Toyota Tercel 4 speed manual transmission?