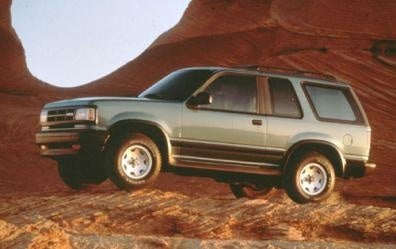 The Mazda Navajo received a slight bump in power for 1993, with its 4.0-liter V6 engine now producing 160 horsepower, up from 155 the previous year (according to the automaker). The Navajo was available in two trim packages. The base DX model came in both two-wheel drive and four-wheel drive versions, as did the higher-end LX model. A five-speed manual transmission was standard across the line, while a four-speed automatic was optional.
All models of the Navajo received four-wheel anti-lock brakes for 1993. Other standard features included power brakes, power steering, 15-inch wheels, and an AM/FM stereo system. The LX added power windows, power door locks, power exterior mirrors, a leather-wrapped steering wheel, and a cassette player. Options included air conditioning for all models, as well as leather seats, cruise control, a tilt steering wheel, and a sunroof for the LX.
For the most part, drivers reported having only routine maintenance problems with their cars. Interestingly enough, many drivers preferred the Navajo to the Explorer, even though it was essentially the same vehicle under the skin, because they liked the interior appointments better.

Have you driven a 1993 Mazda Navajo?
Rank This Car

How Do I Tell If My Relays Are Bad

Mazda Navaho Won't Start. What Would Be The Problem?

92' navaho makes a clicking noise when I turn the key. dash lights and running lights all work fine

Is There A Starter Relay On A 1993 Mazda Navaho?

clicks when I turn key on.