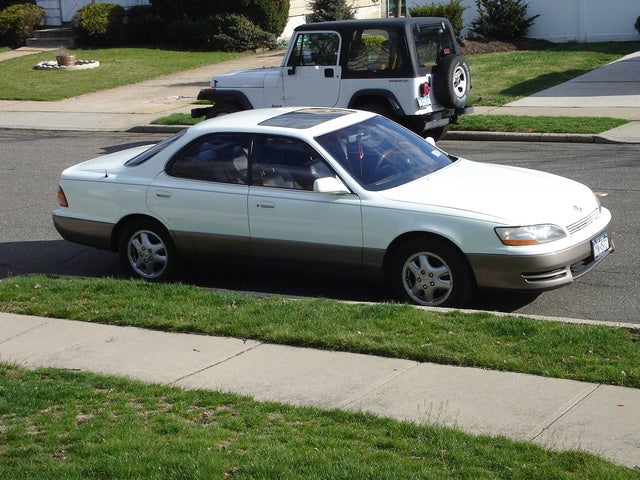 The new Lexus ES 300 remained largely unchanged for 1993, except for a fuel cap tether and locking seatbelt retractors. The ES series had recently undergone an engine upgrade, and an ongoing effort was underway to separate it in both looks and performance from the Toyota Camry. At this point, the ES was still in the early stages of that process.
Lexus intended the ES 300 as a sports sedan, and suspension and handling were adjusted accordingly. Unfortunately for some eager drivers, the ES was only available with front-wheel-drive, which was seen as disadvantage verses most European competition. The same engine returned in 1993: an electronically fuel injected 24-valve DOHC V-6. The more powerful 3.0 liter power plant made 185 horsepower, nearly 30 beyond the original ES. Another horsepower boost would follow in 1994. Despite the additional power, the ES's fuel economy remained at 19/25 mpg. The ES was available with either a manual or automatic transmission, but the manual option disappeared after 1993.
Despite being marked by many reviewers as an under-performer for its class, owners repeatedly applied the 'fun-to-drive' label. Amenities inside the car were steadily increasing, and features like a moonroof, heated seats, and a premium sound system were becoming more common. The options list had also grown considerably, and by 1993 the ES driver had access to all the features of European luxury sedan for a notably lower price.

What should cylinder compression be.

There is no power on the interior of the car but there is power on the battery. The hazzard lights work and the horn. I tried taking the negative cable from the battery still wont work. I used the key...

air bag light on dash does not turn off. How do I reset?

Why is my 1993 lexus es300 v6 3.0 liter blowing white smoke out exhaust checked oil and its not got water in it so its not milky ?