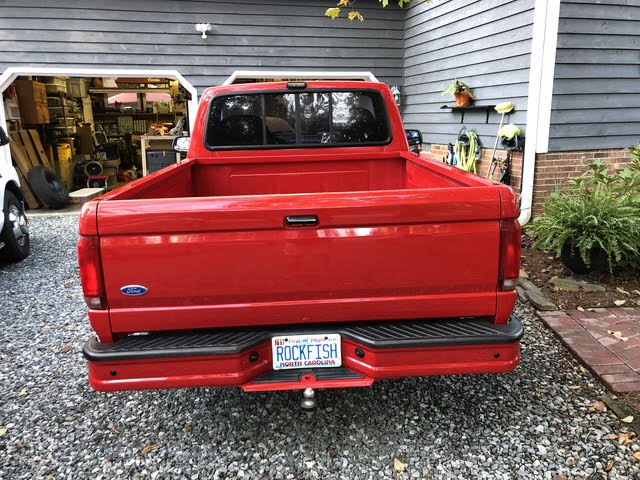 The 1993 Ford F-150 SVT Lightning was a sporty new incarnation of an old favorite. The basic F-150 pickup model was updated with aerodynamic body styling, a luxe interior, and a lot more power under the hood; the 93 Ford F150 SVT Lightning came off the line with a 5.8 liter Windsor V8 engine putting out 284 horsepower.

Ford modified the chassis on the 1993 Ford F150 SVT Lightning a bit, adding some rigidity to balance the increased power. The suspension was modified to bring the truck's center of gravity closer to the ground, which translated to an improved ease in handling; however, some buyers complained about the SVT Lightning only offering automatic transmission (even though it was a fancy-dancy transmission).

The 93 Ford F-150 SVT Lightning had a small production run, and demand quickly outstripped supply for this sexy performance truck. You won't see many of these on the market today!

Guru8G41R I have a red 1993 lightning and I have owned this truck since the mid 90s. The truck is just like the day I bought it no mods and with only 72,000 mile. I has been a very good reliable truck. This truck has been with me for over 24 years have always thought about selling her but ever time I have talk myself out of it. For in fear that someone would get it and finish it off wrecking it. The truck has never been in a accident just scratches and chips. Still run like a champ.

Dynasty_8177 Hello...I had a '93 Gen I red Lighting (4500 miles on it when i got it from the original owner) and have always wanted another one...i sold mine to buy my car show and weekend driver in the Texas Hill Country... '04 Mercury Marauder (25K miles on it) from the original owner...an older gentleman who swore it was never in the rain or left outside overnight...and i must say...given the trophies i have won with it in car shows in this area of Texas.. he was right So...while i am really REALLY wanting another Gen I Lightning...i must figure out a way to buy one without selling my Merc Maybe... Dr. John Denton Bowman Wimberley, Texas

Ford Discontinued Part For My 93 Lightning...What Do I Do?

My 93 Ford Lightning needs part number f3tf-12a650-ac which is the elec cont unit(ECU) Ford has discontinued this part. How can I find this part or can I use another part with a similar to the part n...

I just bought a '93 Ford Lightning. But the guy I bought it from took off the original black bumpers and grill. He also got rid of the stock rims. All of the new parts are chrome. Do you think I shou...

305 views with 4 answers (last answer about a year ago)

How Can I Apply For Financing

My Dash Lights Will Work When I Have Just My Parking Lights On But When I T...