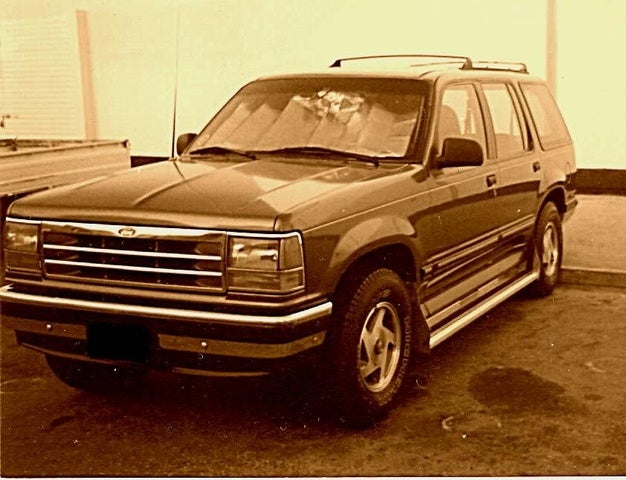 The 1993 Ford Explorer saw another redesign of its engine. This time, the revamp resulted in additional horsepower; the new version of the 4.0 liter V-6 delivered 160 hp.

More power under the hood wasn't the only lure Ford offered to bring buyers into the sport-utility vehicle fold, either. Trim choices for the 1993 model year included the Sport, XL, XLT, and Eddie Bauer, as in previous years, but a new high-end trim, the Limited, set a new standard for SUV luxury. The Limited, available only in a four-door, four-wheel drive version, was full of the latest bells and whistles, 1993-style, including automatic headlights, fog lights, and a navigation console including a built-in compass.

Buyers who weren't looking to be cocooned in comfort had other choices in the other trim lines, including two-door models and rear-wheel drive models (although most buyers chose four-wheel drive versions for their off-road abilities). But the '93 Ford Explorer was a harbinger of the ever-bigger, ever-more-luxurious SUV trend of the 1990s.

Not surprisingly, its gas mileage wasn't anything to write home about. With 15 to 18 mpg city, 20 to 23 mpg highway, the 1993 Explorer may not have been the greenest vehicle out there. But, hey, gas was only a dollar back then!

Have you driven a 1993 Ford Explorer?
Rank This Car

My truck had over heated I tried pouring water into the radiator But notice it began to immediately leak on to the ground as Im pouring But it wasn't leaking from the area of the radiator..it was d...

How do I reset

274 views with 5 answers (last answer about a year ago)

My car is making a temporary squealing noise when I accelerate between 35-45 mph. It doesn't sound like the belt. It sounds more metallic