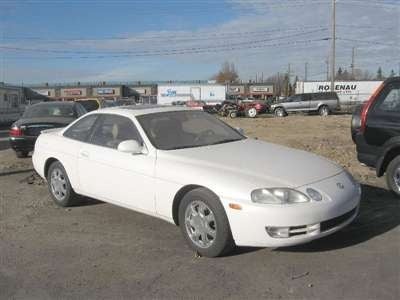 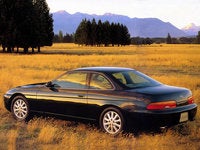 Lexus introduced the SC coupe in 1992, in an effort to introduce their LS luxury and styling into a nimble sports car. The 400 was the pricer of two models. The other option was the SC 300 which housed a smaller 3.0 liter inline six engine and fewer standard features. The rear wheel drive SC offered a unique third option from the Japanese automaker, joining the ES and LS models in their fourth production year.

A 4.0 liter V-8 powered the SC 400, generating 250 horsepower and 260 lb-ft of torque. The comparatively heavy SC (almost 4000 pounds) made 0 to 60 in 6.6 seconds, while consuming fuel at about the same rate as the SC 300. Gas mileage was observed at 18 mpg in the city and 23 on the highway, and the vehicle performed best with premium fuel. The SC's suspension was a bit softer than most sports cars, preserving the soft Lexus ride quality, but it still allowed for a tolerable amount of road feel. It was considerably stiffer than the LS 400.

The 2+2 notchback body provided a surprising amount of room for the two front seats, with space being a bit more cramped in the back. Head room was adequate even for taller drivers, and despite the low seat position drivers experienced few visibility issues. Owners have praised the SC's effortless acceleration and smooth transmission, noting that the interior remains very quiet throughout speed increases and shifting. Although wind noise was also minimal, many drivers were surprised by the amount of road noise. Many of the common repairs related to the AC system.

Projectmgr22 Sleek and powerful with style. Exceptionally dependable. A real sports car with decent handling. Particularly powerful in second gear. Like a jet on take off accelerating quicker and faster. Unbreakable. Very expensive to service via Lexus. Always shocked by any service cost at Lexus but the car will run to 300,000 miles no problem. Trouble passing smog. Fav

1. what is the floor mounted button under the accelator pedel? Dont think its a problem but what does it do? 2. Cant get the volume up on the rear speakers. I can fade from front to rear ok but no vo...

I Am Trying To Figure Out How To Remove And Replace The 150 Fuse Under The ...

Both red lit needles went out on the tach and speedo. Are they lit by bulbs that can be changed out on the back of the instrument cluster?

I had the wiper motor replaced. Wipers would not work.....started working for a few minutes then stopped again. Had the wiper switch replaced and still not working! Any suggestions?

Where is the horn relay located on a 92 Lexus sc400