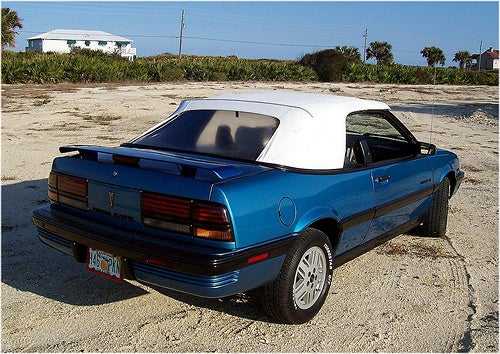 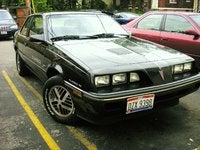 There are several changes to the 1991 Pontiac Sunbird, most notably the loss of the turbo engine in the GT coupe and LE convertible. In its place is a new 3.1-liter, 140-hp V6, which comes standard in these two trims and is optional on all but the base coupe and sedan. Though it gets less horsepower, the V6 provides added performance and acceleration to the compact car.
The 1992 Sunbird also gets a new base coupe and sedan. Along with the LE sedan and the SE and LE coupe, these are powered by the 2.0-liter, 96-hp I4. A 5-speed manual transmission is standard across the line. Both the LE convertible and GT coupe are more performance oriented, not only because they carry the V6 engine, but also for their sports suspension and handling. The coupes come with a rear spoiler, Rallye instruments, supportive seats, and a sunroof option. Power windows and locks are not standard except on the convertible. Mileage wavers somewhere around the 26/36 mpg range, making the 1992 Sunbird economical as well as versatile and fun to drive.
There is a good amount of interior space and trunk room in the 1992 Sunbird, though rear legroom is compromised, particularly in the 2-door coupe and convertible. But owners love the new V6 power for better pickup and highway confidence. They say the Sunbird is reliable, maintenance is inexpensive, and fuel economy top-notch. Being a compact, it's very easy to park, ideal for city living. Downsides include problems with the alternator, interior materials falling apart (the headliner in particular) and the lack of legroom and cupholders.

What's your take on the 1991 Pontiac Sunbird?

TommyMotorhead I SPECIAL ORDERED a 1991 Pontiac Sunbird new in '91. I did not want the GT Hardtop, nor the LE Convertible, so my dealer gave me a blank sheet of paper and said .... what do you want. We 'built' a GT Convertible. My blue baby has the 3.1L V-6, GT suspension, premium wheels, 5-speed, and the side front badge "3.1L" on the fenders. It has 43,000 miles today and has only been driven in the summer. Never seen snow. Additionally, the day it was delivered I took it to Ziebart and had it rustproofed. It's now in my garage, I just waxed it and it looks like it came from the dealer's showroom. My problem. No one has a value they can assign to this car. No one else has one. I'm told they do not exist. What to do?

Have you driven a 1991 Pontiac Sunbird?
Rank This Car

How Do I Remove The Door Panel To Fix Window Off Track?

Car Will Start But Wont Stay Running, Why

I'm looking for a Users Manuals and also a workshop manual for my 1991 Pontiac Sunbird LE 2.0 Convertible. SOHC 2.0 LT2 engine. I live in Belgium. Who can help me?

grounded dt port fan comes on got 34 code(map sensor) ,changed map and coolant sensor no change put noid light on no pulse when cranking,any ideas would be great