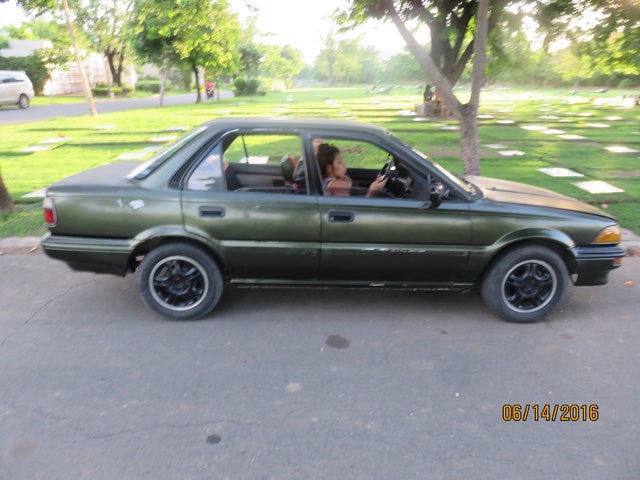 Average user score
4.2 ⁄ 5 stars
Based on 38 reviews
If You Can Drive, It Can Race. If You Can Drive Well, It Probably Will Win. by Nicole — Manual Tranny, Sports Coupe, 16 valve, twin cams, fun to race, body is very lightweight because of size of car. If slightly lowered, center of gravity is below ground for increased stability around ti... Read more
Toyota Sr5 Corolla by Krista63 — I learned to drive stick on this car and it has 260,000 KM on it and is still on its original trans/clutch. I couldn't ask for a better learning car. I have not have had to replace anything based on... Read more
Old Reliable, With A Little Pep To Make It Interesting. by Ramon — They key factor to making a car the best it can be is build quality. Toyota has been the leader in quality products for decades. And my little corolla is no exception. What it lacks in performance and... Read more 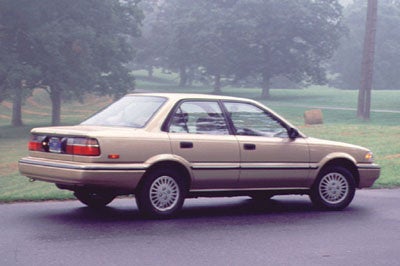 The 1990 Toyota Corolla saw a few small changes. The All-Trac sedan, introduced only the year before, was discontinued. The base engine got more power, as did that of the GT-S. Toyota also introduced an entry-level sedan, which had smaller tires and only came as a manual or three-speed automatic.

The 1990 Toyota Corolla came in many body styles with several trim levels. The sedan came as a base, DX or LE. The wagon was available as a DX or SR5. The coupe came as a SR5 or GT-S. All Corollas came equipped with a DOHC, 16-valve inline four-cylinder engine. The sedans, wagons, and SR5 coupe had a 102-horsepower engine and the GT-S had a signifigant upgrade to 130 horsepower. Fuel economy is about 22 to 33 mpg, depending on the engine.

Drivers describe their 1990 Corollas as "no nonsense" and admit that while they aren't flashy, they are reliable and perform well in all kinds of conditions. Some drivers have had problems with rust, and others complain about the bare-bones options packages that Toyota had offered with this car. It does not come with a lot of frills.

What's your take on the 1990 Toyota Corolla?

dottie123 I bought it new off the dealer lot. white, blue interior, the DX model. It had 249,000 miles on it . I had a bad power steering leak, that caused the fluid to eat the motor mounts, which were replaced twice. :( the shaking of the motor inevitably caused the transmission to brake away. Towed it to car repair to find out they couldn't fix it & the car is no longer road worthy because of it :( If I had the money to buy another I would without hesitation!! This is by far the best car that I have ever had. Always dependable. This is the only time it left me on the side of the road. Wish I could go back and fix it again. Bought another car to replace it, but it doesn't live up to the Corolla DX in any way.

Have you driven a 1990 Toyota Corolla?
Rank This Car

My mother in laws car. Min amps out of battery with key off 3 to 4 amps. Car sits 2 or 3 days and it will not start needs to be jumped. Had alt. and tested and battery is new. Jumps starts right away....

How To Replace 1990 Corolla Radio.

I can’t figure out how to take out the radio in my 1990 Toyota Carola. Does anybody have a video or a step by step? Thanks

I placed tire/rims on there great the rear hit the mushroom part of coil over, when it bumps. Any suggestion, smaller springs, air shocks, spacers. Ect.

Looking For First Car, Would 1990 Toyota Corolla Wagon Be Worth Getting For...

So I'm looking for my first car right now. Don't need anything fancy or new, just something to get me around for now and maybe a small road trip before it dies (but that's secondary). Just started ...