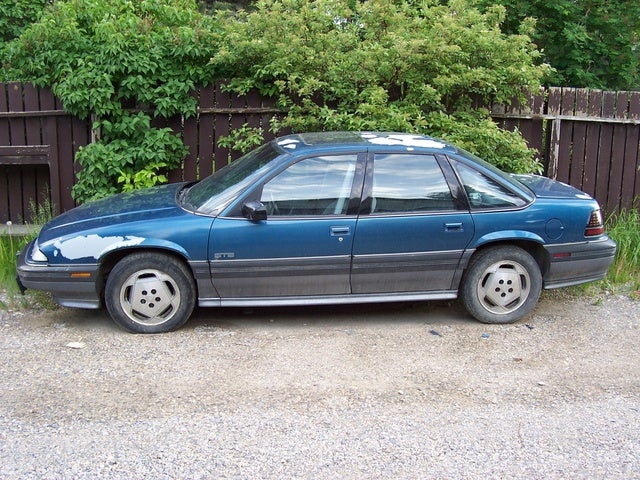 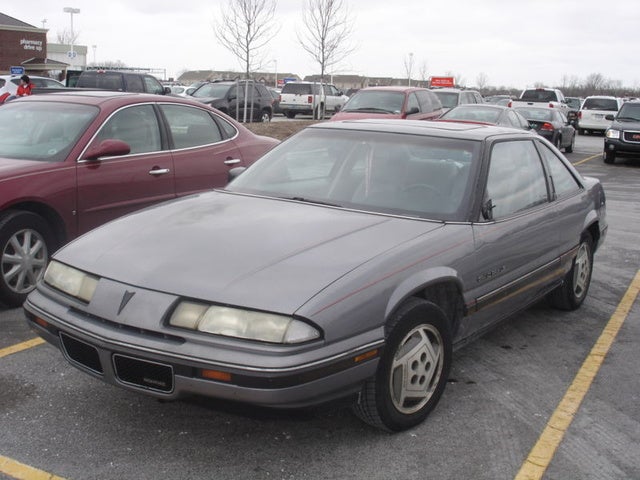 The 1990 Pontiac Grand Prix went through a slight transformation this year as it adds two sedan models to its previous coupe-only offerings. The base coupe has been dropped in favor of an LE sedan with a new Quad 4 2.3-liter, 160-hp engine. It comes only with a 3-speed automatic. This new engine is also in the LE coupe. A new STE sedan shares the 3.1-liter, 140-hp V6 engine with the SE coupe, though it can also be equipped with the turbo version of this engine found in the Turbo coupe, rated at a much more exciting 205-hp. This V6 comes with either a 5-speed manual or 4-speed auto tran.
The 1990 Grand Prix STE sedan has been outfitted to resemble the Turbo coupe in terms of its feature sets and build. It has the same sporty suspension, but with smaller tires. It gets a new front and rear end, nose-width foglights, and an instrument panel that resembles the racier coupe. Compared to the base LE sedan, which does not offer even power windows and locks, the STE gives you remote entry, 8-way power seats, and an upgraded driver information center display. However, the Turbo coupe remains the head of the pack in terms of performance, and it includes standard ABS brakes, which are only an option on the other Grand Prix models.

The mid-size luxury 1990 Grand Prix seems to offer a lot of nice amenities, enhancing the driver's experience while behind the wheel. Most owners like all the standard features and say the seats are very comfortable. They are happy with the gas mileage and V6 engine power, as well as the overall look of the Grand Prix. Like other Pontiacs of this time, the Grand Prix has a lot of mechanical and electrical problems, particularly with its ABS system wearing out quickly. Another common critique is that the fuel indicator light always seems to be on for no reason.

What's your take on the 1990 Pontiac Grand Prix?

Have you driven a 1990 Pontiac Grand Prix?
Rank This Car

Turns Over, But WIll Not Start

can you use a regular master cylinder and omit the abs function? how would you hook the four lines?

48 views with 3 answers (last answer about a year ago)

Where Can I Purchase A Instrument Panel Cluster

RPM and Speedometer gauge needles going back and forward

I know that a 5 speed manual was a option (almost none took) for my 1990 pontiac grand prix SE coupe, i have the 3 speed with overdrive. if i bought the exact 5 speed transmission how hard would...

If I install an aftermarket stereo (head unit and speakers no amp or subs) do I need to also have my antenna connected to it? My antenna recently broke and I was going to put in a new stereo syste...