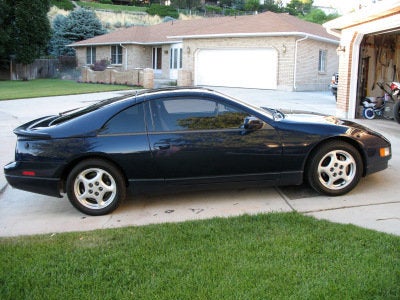 Nissan redesigned the 300ZX, part of the company's beloved Z sports car line, for the 1990 model year. The new car included a turbocharged trim. Two body styles were available: a two-seater and a "2+2" four-seater. The turbo came with a T-top roof, and the other trims were available with removable roof panels. Starting in 1990, this generation of Zs made Motor Trend's top ten list for the duration of its production.

The 1990 300ZX was available in three trim levels: the 2+2 hatchback, the GS hatchback, and the turbo hatchback. All trim levels came similarly well-equipped, with power windows and doors and air conditioning. The main differences among the trims were body style and engine. The GS and the 2+2 shared a 3.0-liter, 222-horsepower V6, and the turbo had a 3.0-liter, 300-horsepower V6. Fuel economy was about 18/24 mpg.

Nissan's Z-series has a loyal following, and the 1990 300ZX was no exception. Drivers appreciate its classic, sporty looks, smooth handling, powerful engine, and solid reliability. Some drivers complain about the small backseat in the 2+2, but admit that they can't expect much more in a sports car. Other drivers complain that parts can be expensive, but fans contend the expensive parts are key to the car's reliability. The price of a part and how long that part will last do tend to be related.

Roger 12500. It have twin turbo engine and auto transmition

What Are These On The Undercarriage Of The Car?

50 views with 2 answers (last answer about a year ago)

Just trying to figure out what to do with it... if it can't fit or will cost an arm and a leg does anyone know what the best bang for the buck is on performance parts for it?? Toget the most hHP o...

163 views with 2 answers (last answer about a year ago)

I just changed the engine harness and now it wont start. I checked that every plug was correctly in its place, but nothing. I checked the the ECU, but it said that it does not have a problem. What ...

My car sat for almost a year and now it turns but want crank getting gas but want completely turn over bought a used module still want crank is there a possibility of a sensor gone bad or what please ...

216 views with 5 answers (last answer about a year ago)

So like in my 300zx z32 when ever I go into any gear it wiggles like it's in neutral how do I solve this.