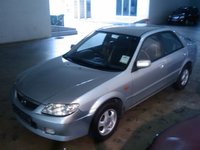 When Mazda redesigned its subcompact 323 in 1990, the automaker decided it was time to split the line into two separate models. So the 323 badge was retained for the two-door hatchback, while the four-door, slightly larger version of the car became the Protege.
For its first year, the Protege sedan was available in three versions. An entry-level SE sedan was powered by a 1.8-liter, inline four-cylinder engine that generated 103 horsepower, while a higher-end LX trim package, as well as a base model equipped with four-wheel-drive, received the same 1.8-liter four-cylinder equipped with twin camshafts, which boosted horsepower to 125. A five-speed automatic was standard for all three models, while a four-speed automatic was optional.
Standard features for the Protege SE included power brakes, a rear window defroster, 14-inch wheels, and a remote trunk release. The 4WD and LX packages added power steering, while the LX also added power windows, power door locks, power exterior mirrors, and a tilt steering wheel.
Drivers were impressed with the Mazda Protege, citing its aggressive performance, responsive handling, ample trunk space, affordability, comfort, and reliability as among its positive points. On the downside, drivers noted that parts for the Protege could be expensive, and that the car was lacking such safety features as airbags and anti-lock brakes.

Have you driven a 1990 Mazda Protege?
Rank This Car

with clutch depressed turn key car cranks once then goes off . tried pumping clutch so to catch correct position used to work doesnt any more tried so many times battery died

I Have Put New Fuse In My 1990 Madza Protege And And It Wont Crank Every Th...