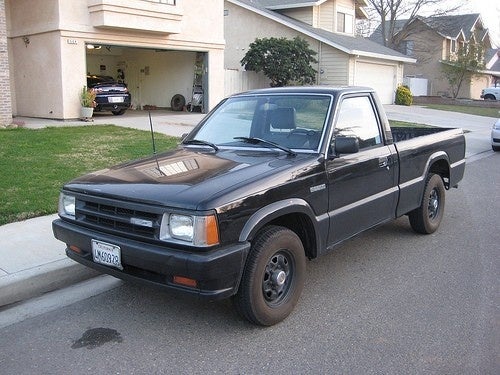 The Mazda B-Series pickup truck was available in several different configurations for 1990. Models were divided into either standard (or short) cab and extended (or cab plus) versions. Both standard and extended cab models were available with either two-wheel or four-wheel drive, and with either a 2200cc or a 2600cc engine (engine size was incorporated into the nomenclature of the B-Series pickups).

Standard features for the B-Series were admittedly limited, and included vinyl seats, power brakes, and 15-inch wheels. Air conditioning and a cassette player were among the few options.

Despite its lack of amenities, the B-Series was comfortable for occupants, according to drivers. Other positive points noted by drivers included the B-Series' reliability and gas mileage.

Have you driven a 1990 Mazda B-Series?
Rank This Car

266 views with 5 answers (last answer about a year ago)

I Found Antifreeze Puddled On Top Of The Lower Plenum Chamber

There are small coolant lines running to & from the throttle. Does this coolant also port thru the intake manifold?

Where should the needle be at at a normal running temperature? My gauge goes about 3/4 of the way up . Is it running hot ? Shouldn't it go to halfway and stay ?

I have a 90 Mazda B2200 single cab long bed manual transmission with the 2 piece driveline. Can anyone tell me what other driveline would work in its place? Hearda Ford Rangers would,but which on...