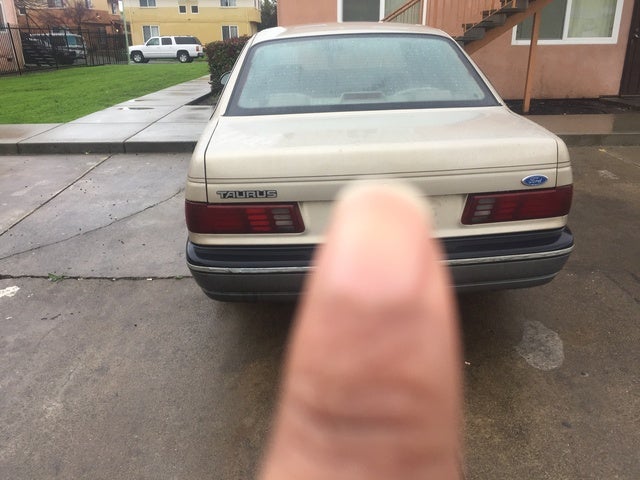 Average user score
3.8 ⁄ 5 stars
Based on
by Chris — I love my car because: I can fit 6 people, ski gear to include two snowboards (160's) and two or more sets of skis ( also 160's) and cooler and winter clothes for five. Five inside the car to go sno...
by Jordan — This was the 3rd Taurus S.H.O. I owned. Got if for dirt cheap with a bad clutch, which a friend and I replaced. I advise no one to do this. It was a nightmare, but we got it done. As with all S.H....
Have you driven a 1990 Ford Taurus?
Rank This Car

Why Do The Brakes On 90 Taurus SHO Keep Adjusting Out?

Left rear disc brake assembly keeps adjusting out till it over heats. Also when I replaced the caliper I could not get any brake fluid coming out of wheel cylinder when bleeding it.

Can I Buy A Used Fuel Pump If I Know That It Works?

How To Replace A Headlight Fixture On A Tauras Wagon

Only Complaint that I have is that Ford has decided to stop making the Taraus, in favor of SUVs & Crossovers. They are comfortable, roomy, & Safe. :) Read More

Awesome from bumper to bumper. It feels like a real car compared to the foreign cars of late. Saddened to see the Taurus discontinued. Read More

Ford Taurus Is The Way To Go For A Family Sedan!! By jessicaagee

I love my car! It was the best investment I have made. It handles awesome in the snow and overall has amazing handling and speed. I feel 100% safe putting my kids in the back seat and taking off on a... Read More

Fantastic looking car with a ton of options and a lots of space. Slightly disappointed in MPG at 26 compared to other Taurus's I have owned at 28. Like the touchless key options for doors and trunk. N... Read More

All Around Amazing Vehicle. Great Family Car. By scole22

Its a hard car to get used to. When you first get in and drive, you are overwhelmed with blind spots. But once you get used to the feel it grows on you quickly. I guess that's why they added the back ... Read More

I like the great power out and very good handling , but I don’t like the interior quality. Back up camera it is must , but it is exist in 2014 SEL but not in 2013, Nice Technology and perfect exterior... Read More

I Love This Car! By dkupers68

Fantastic car that will do almost anything you want it to. It's capable on dry pavement, but doesn't shy away from wet and snowy roads with its AWD. No buttons, just get in and go. If I had to buy ... Read More

This is my second Taurus, the other was a 2010. Ford has done a great job with style, comfort. I had always been a Chevy guy but would highly reccomend this car to anyone with a big family, does all... Read More