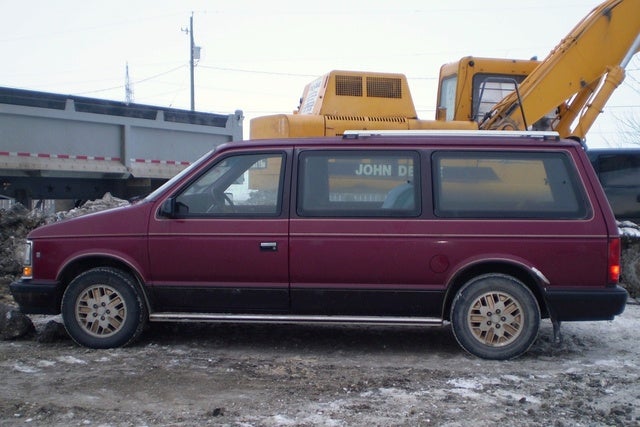 Average user score
4.8 ⁄ 5 stars
Based on 4 reviews
Great For Getting The Kids, And Everything Else Around. Awesome Roadtrips by Ghostimage — Quality, only repair I have ever needed on this van was the fuel pump, after 20 years I would say a reasonable life span on that! A bit on the heavy side for city driving, but a dream to drive on tho... Read more
Comfortable But Not Sporty by davycrockett — Quick for a heavy van, had great brakes, kind of 'rolly' but a great driver Very well made ran for 190'000 miles, before fuel pumps kept going wrong Was a very great looking van around 20MPG, had some... Read more
Its Rusty But Its A Bull by TJ — has alot of power and can haul just about anything. sound system is amazing, and handles pretty well. Read more

The Dodge Grand Caravan, along with its slightly shorter older brother, the Caravan, was Chrysler's most popular vehicle in 1990. Still ahead of its competition, though starting to feel their breath on the back of its tailgate, this would be the last year of the first generation of Caravans, set for an overhaul in 1991.

This three-door minivan was set on a slightly longer wheelbase (119 inches) than the regular Caravan and had about 12 more inches of cargo space in the rear, yet was still able to fit in an average garage. The extra length meant more stability, if a little less maneuverability. Three rows of seating fit seven passengers, who enjoyed such conveniences as climate control and cupholders. The 1990 Grand Caravan was available in four trims -- base, SE, LE, and Turbo, for that extra power when you've got one too many grocery bags in the back. Powered by a 3.3-liter, 150-hp V6 engine, it wouldn't win any races, but it handled easily and was a sturdy carrier.

Not surprisingly, drivers loved all the room inside the 1990 Caravan, which made it easy to transport kids or cargo, though the seats were difficult for one person to remove. Interior comfort was also a plus. Most complaints focused on repair shop visits, most notably for transmission problems. A cheap paint job and poor acceleration and fuel economy were also mentioned.

What's your take on the 1990 Dodge Grand Caravan?

Have you driven a 1990 Dodge Grand Caravan?
Rank This Car

Back Up Lights Dont Work

when i drive with alot of on off trips. i will then start it up and it will go into gear then it just free revs in all forword gears i still have rev. i already put in a new main trans comp frm chrys.