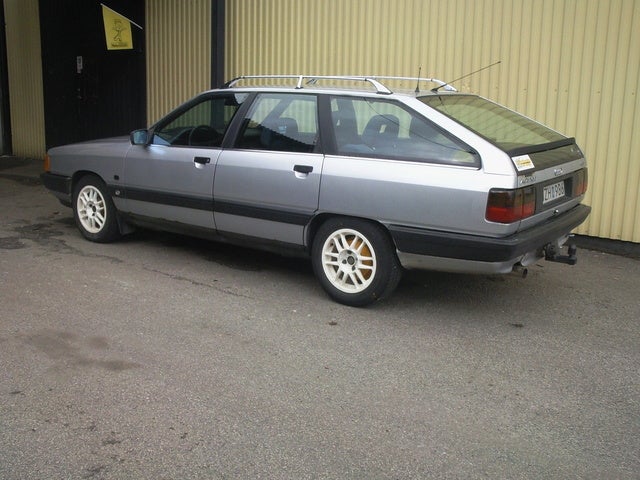 Very few changes touched the 1990 Audi 100. Surviving an erroneously bad report from the National Transportation Administration in 1988, which was later corrected, the Audi 100 was struggling a bit in the U.S. to re-establish its quality name.

With the Audi 100, you had a choice between a standard four-door sedan or the unique all-wheel drive quattro sedan, both with a 2.3-liter, 5-cylinder, 130-hp engine and ABS brakes. The quattro came standard with a 5-speed manual, while the base sedan featured a 4-speed automatic. When first introduced, the quattro system was unique to sedans, and improved Audi's crash performance rating by increasing traction, stability, and reducing wear on tires.

Its rounded aerodynamic look, with flush wheel covers and window frames inspired many copycat redesigns by competitors. Inside, it was luxuriously roomy for five, and offered many amenities standard, such as cruise control, power heated mirrors, security system, and power sunroof. Despite being such a heavy car, owners mention how light and crisp the 1990 Audi 100 felt to drive and how easy it was to maneuver in traffic. Other highlights include its speed, quiet and smooth engine, firm and balanced handling, spacious interior, and the way the quattro tackles snow and ice. Drawbacks were reliability, slow acceleration, and very expensive replacement parts.

In What Order Do The Sparkplug Wires Go Onto The Distributor Cap In 1990 Au...

car started prior to changing the plugs and wires on 1990 Audi 100 and now it wont start. It is turning over but just cranks. I've done this many times and know the how-to process but I wanted to ask ...

changing all of the belts on my 1990 Audi 100 base have figured out what bolts to loosen but, can not figure out which ones to loosen in order to get the a/c belt off