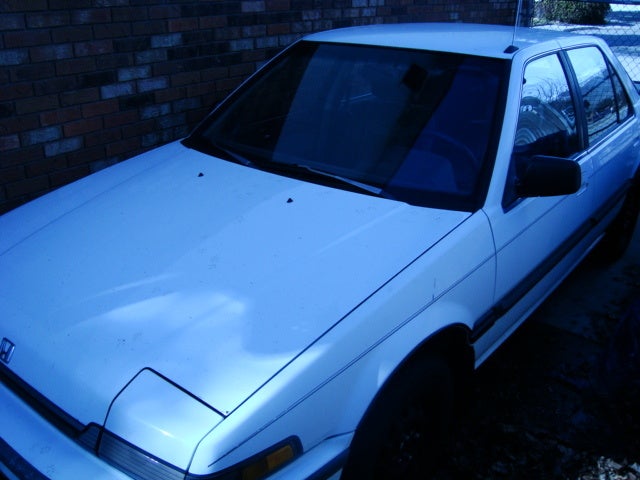 Average user score
4.5 ⁄ 5 stars
Based on 31 reviews
Great Car For Its Age by amcgrady — I bought this car over 3 years ago for $1500.00. Mine was the 4-door manual transmission version. I was expecting better gas mileage from it but I wasn't unhappy with the 30mpg I was getting. It wa... Read more
1989 Honda A Great Car For The Last 20 Years (and Still Drives Like It Did When New!) by jet1942 — my son's first car out of college. when he moved to japan I bought it for my daughter to drive in high school and college. In 1998 I swapped my 1996 honda for the 89 cause I thought it would be more r... Read more
Take Care Of It And It Will Take Care Of You! by Krissy — This was my baby. I loved this car. It was in all around good car. The only little problem with mine was it had a pretty bad oil leak. No one could tell me where it was coming from and it kept ruining... Read more

The 1989 Honda Accord was the last of that generation. Borrowing an idea from the previous generation, Honda said goodbye to the third generation Accord by offering a luxurious special edition. Otherwise, the Accord stayed mostly the same.

The 1989 Accord came in several varieties, including the DX, the LX, the LX-I and the SE-I. The DX and LX were available as a sedan, coupe, or wagon, and the SE-I was a coupe only. The DX was the base model, while upgrading to the LX gets power windows and doors, while the loaded LX-I gets a bigger engine. The special edition SE-I was luxuriously equipped, with leather seats, a Bose sound system, and alloy wheels. The base engine was a 2.0-liter 98 horsepower four cylinder, while the LX-I and SE-I came with a 2.0-liter, 120 horsepower four cylinder.

The 1989 Honda Accord is beloved for its reliability, good looks, comfort, and practicality. They have excellent reputations as solid, durable cars. Some drivers do find them to be on the small side for a family, and others grumble about the lack of cup holders.

skr00ples The SEi also came in a 4-door Sedan.

GuruHKBY5 I see cup holders in the 89 accord SEI hidden until you pull them out. My 86 Accord LXI is insanely still a good car. They outsold Camry nearly 3-1 in 86'. So I bought the 89' SEI knowing what a great car! Paid too much but had to have it. Today 7/28/19 it has barely 40,000 original miles. Again, cup holders, more travel in suspension, disc brakes front and back, special 14" alloys, Boise sound, gussied up with leather and upscale touches... makes a crazy good ride. They are a little underpowered which I'm glad for because the longevity of the engine is increased holding it to 120 bhp. Wish I had the stick but you know what(?) the automatic is also great. Why? u-have four fwd gears then the over drive kicks in; feels like a 5-speed automatic, because basically it is, meaning starts out in 1st followed by four shifts = five speeds. Love it! The gal that owned it since new is now 83 years old and was still waxing it herself. What a doll to talk to. The car is likely pristine so she is a hard act to follow. I have my work cut out to keep it as nice. Cheers ... as she would say.

Have you driven a 1989 Honda Accord?
Rank This Car

Cars compared to 1989 Honda Accord

How Do You Remove Front Windshield Molding Trim 89 Honda Accord LX 4dr Seda...

Can A Starter Overheat?

The rear brake lights will not turn off. Even when the head lights are off & the car is turned off, the rear lights remain on. Has anyone else had this problem or know how to fix it? Thanks, Will

841 views with 5 answers (last answer about a year ago)

Automatic transmission will not upshift

1989 Honda Accord Trims For Sale