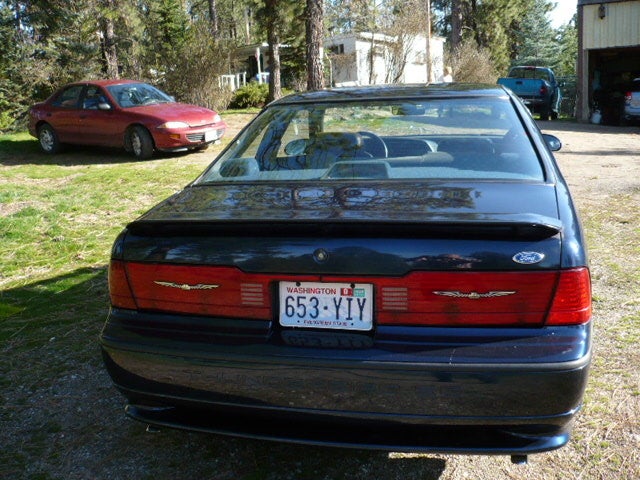 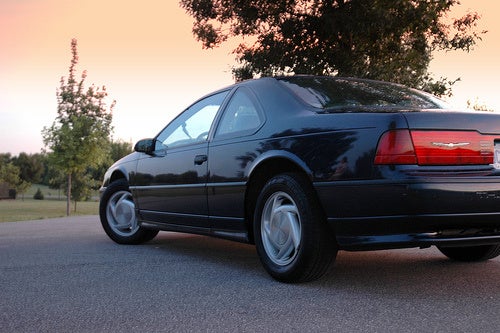 In 1989, Ford once again undertook a total redesign of the Thunderbird line. The 1989 Ford Thunderbird was longer and lower than the preceding generation, and weighed in at roughly the same 3,600 pounds. Nonetheless, Ford decided to drop the V8 option (why?!) which drew complaints from T-Bird loyalists who missed the muscle under the hood.

The base and LX trims were nice-looking cars, with the sleeker, swoopier styling. Some drivers found them a little sluggish: the 3.8 liter V6 put out just 140 horsepower, which didn't live up to the TBird tradition of power and performance.

Where the '89 Thunderbird did shine, though, was in its top-of-the line coupe. Renamed and re-engineered for 1989, the Thunderbird Super Coupe sported the supercharged 3.8 liter V-6 with intercooling, and put out a healthy 210 horsepower and 315 lb.-ft. of torque. Fuel injection was controlled by computer (quite a cutting-edge technology in 1989).

Reviewers raved about the 1989 Thunderbird Super Coupe: in fact, it was the Motor Trend 'Car of the Year'. Despite the good buzz around the top-end trim, overall sales of the '89 Ford Thunderbird were not what the guys in Dearborn were hoping for.

What's your take on the 1989 Ford Thunderbird?

Winngrip had a brand new one in 1989, red just like the pic above. The computer suspension enabled it to run very quick times at Portland International Raceway

GuruCFSHR It is a 5 speed, moon roof, burg. leather, with awesome white on the body. The car is the best out there...unless some Ford motor Mr. Bigg Shot has a better one. But I doubt it. This car is the ultimate driving machine! I owned a new one in "89" and could never forget it. So I bought this one with 8400 miles on it.

GuruCFSHR The rest of the world can "eat your heart out" (never really understood that catch - phrase) this car is the sleeper of all sleepers....fast, quick, sturdy, soft, luxury, sport, and it will slap you back better that any chiropractor.

Guru9BX3K2 So sad that a 10 cent piece of plastic (on the plenum) failed and cost me several thousand in repairs and sales. Bought a brand new off the floor 89 Bird. Outright lies from the Ford dealer and Ford corporate (who I called after the service manager at the dealership told me I had a burned up transmission) as to why, overnight sitting in a hotel parking lot, I could have a car that in the evening when I parked, it was perfect, and by morning have a transmission that would only slightly work in low. Too bad their wasn't a $$$BILLION dollar class action against Ford for their lack of truthfulness. The transmission shops made $$$BILLIONS "fixing" transmissions when they only had to replace a 10 cent piece of plastic and charge the customer $600.00-$800.00 for a rebuilt (HA,HA) transmission.

Have you driven a 1989 Ford Thunderbird?
Rank This Car

i have 89 ford thunderbird 3.8l i have spark and 40psi at the test port of fuel rail. it cranks but won:t start

89 Ford Thunderbird Lost My Overdrive What Might The Promblem

46 views with 2 answers (last answer about a year ago)

Supercharger In Base 89 Tbird

Is there a way to put a supercharger from the sc thunderbird onto the base model 3.8 liter v6? What needs done?