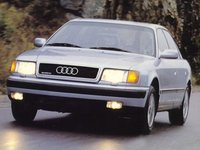 The 1988 Audi V8 was Audi's entry into the luxury car market. The V8 was the top-of-the line sedan in the Audi lineup, and though based on the same platform as the 100, it featured a bigger engine and a longer wheelbase. Unlike the 100, the V8 came standard with Audi's innovative quattro all-wheel drive system. Its engine was essentially two Golf engines linked together to create a 3.6-liter DOHC V8 that hit 240-hp and was paired with a three-mode 4-speed electronic automatic transmission. The three modes ranged from economy (E) to sporty (S) to manual mode (M).

The V8 represented two firsts in Audi history -- the first Audi to use engine specs as a model name and the first Audi to combine quattro with an automatic transmission. Except for a different grille, large wheel arches, and the longer wheelbase, the 1988 V8 was basically indistinguishable from the 100/200, and this may explain why it was not a big seller for Audi in the U.S. Its large size and quattro system also weighed it down, so it was not able to take full advantage of its engine power. Inside, it was appropriately luxurious, roomy, and comfortable, typical of Audi's attention to detail and focus on the driving experience.

This roomy interior was an attractive selling point for the 1988 V8, as was its engine power once it got up to speed on the highway. The quattro handling and road grip was superior. However, the weight of the car hampered acceleration and kept it from competing with comparable cars from BMW and Mercedes.