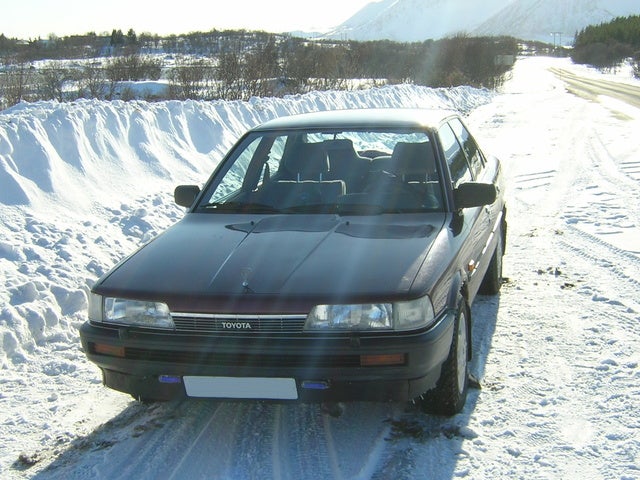 Toyota completely redesigned the Camry for 1987, ushering in the second generation of America's current best-selling sedan. The car's look evolved into a sleeker, more updated style, although it still looked conservative. Toyota abandoned the hatchback and introduced a Camry station wagon.

By reducing road noise and vibration, Toyota began to distinguish the 1987 Camry as a car for people who didn't want to really notice their cars and only wanted a smooth, quiet, unremarkable ride, unlike its competitor the Honda Accord, which offered the driver more "road feel" and interaction.

The 1987 Camry still came with a 2.0 liter, four-cylinder engine, but this time boasted 115 horsepower, due to its new 16-valve twin cam engine. For the first time, the 1987 Camry was available in three trim levels: base, the DLX and the more upscale LE. Fuel economy for the 1987 Toyota Camry was approximately 29 miles per gallon.

krassie I bought mine brand new, 28 years and 3 days ago. With 233,000 miles on it, I have to say it held up to it's claim of being car of the year. I used to take care of it with regular maintenance but over the last 15+ years, I really lagged. I have virtually put no money into it. It's a 5-speed manual transmission that hauls butt and my only problems with it were the ignition key and a faulty distributor in the beginning, that was impossible to diagnose. Once that was replaced, I had no problem. The ignition sits at a weird angle and basically eats the keys. I replaced the ignition in the first 5 years, and it needs to be done again, but I'm too cheap so I just keep making new keys (which will come out while the engine is running.) I just replaced one of the headlight bulbs for the first time ever. The seals are cracked, it leaks moisture and with all Toyotas that I've owned, the wheel wells in the trunk fill up with water when it rains. I finally removed the plugs after about 10 years. There are some other design flaws in the body, but I still get 30mpg highway and 26 in town. I absolutely love this car and hoping I will get another 100,000 on it.

Have you driven a 1987 Toyota Camry?
Rank This Car

Why Do My Brake Lights Stay On, I Replaced The Switch At The Brake Pedal An...

when the car is turned off, all three brake lamps stay on and drains the battery. I have replaced the brake peddle switch and checked fuses, also replaced lamp failure relay in trunk. what else can ...

What Type Of Oil Should I Use?

my 1987 toyota camry has spark but wont start, i have checked all the basics i also checked the fuel pressure regulator. my car was also driven with very little oil in it. if anyone can help me fig...

What year transmission will fit in an 87 Toyota Camry