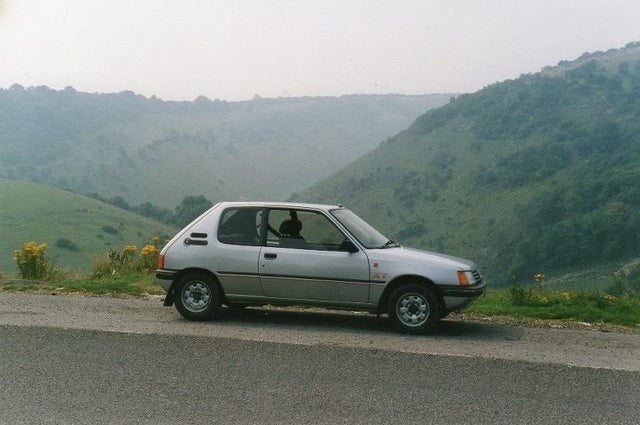 an excelent car...the only thing that misses is the road handling but besides that it's a great car for a begining... the build quality is pretty solid...dont need to repair much (i havent got to need... Read More

My Work/runabout Car By Tony

106 - not 205! This is my little run around that i use for getting to work - its only a one 1.0 ltr so its cheap as chips to run but not for getting excited. Its going to be my missus car when she eve... Read More

A nice little lovely car that can easily hold four grown people and their luggage. The 205 feel best in city driving, and it's small size helps with parking. The boot is big enough for shopping and wh... Read More

Good acceleration and handling. Not much power but lots of fun to drive and able to out run bigger cars in back roads. Rattles everywhere (a very light car) but good build, especially mechanicals. Ver... Read More

50 mpg £200 pound budget blaster.And its good fun too GTI suspension diesel turbo engine The best of both worlds.Sunroof leaks rev counter does not work thats the only faults with the car. motoring ca... Read More

1.1 pug 205 1993 light blue, couldnt go round corners in the wet, brakes were naff but it dun well off the line wen dc'd wernt the best lookin car but done the job of gettin me places, very fun 2 driv... Read More

Aahh the car that's guaranteed to pull your face off! 16 valve motor from a Peugeot 405 Mi16 and all hell breaks loose when you stamp on the loud pedal. Main problem is keeping the front wheels on the... Read More

Still Today, It Can Mach Most Modern Cars. By Halldór

Its the 205 Gentry, a spcial edition GTI So it is a perfomance car in general. Unfortunatly its an old sportscar, so it tends to break down. Interior looks good, needs some work on the outside. Its AL... Read More

A car that puts a smile on your face. Just dont buy a high milage one like me where everthing started going wrong. Typical french dash made of brittle plastic. Awesome handling. Great to drive. Very l... Read More

very practical economical little van runs and drives very well will do over 400 miles to a tank of diesel the best 205 i have had a great fun little car to drive handles very well one of the best ca... Read More

CarGurus has 1 nationwide 205 listings and the tools to find you a great deal.