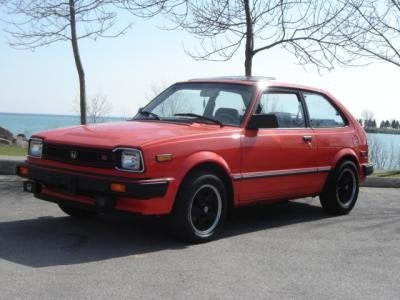 Average user score
4.7 ⁄ 5 stars
Based on 6 reviews
If Honda Made One Exactly Like It Today, I'd Buy It In A Heartbeat! by jpl4nscale — 1983 Black Honda Civic 1500 "S". Pocket rocket! Rev happy engine, precise 5 speed shifter. Comfortable for long distances in part because of "S" only seats. Averaged 42 MPG for the life of the car. ... Read more
1983 Honda Civi Fe - Hwy - 55mpg by Bill — This was the "FE" model hatchback and was the 1st auto to have an EPA highway rating of 55 mpg! I put about 70,000 miles/year for 3 years - only service work performed - brakes and clutch. The actual ... Read more
Honda's Run Like If They Are 20 Years Younger And Longer. by dp_83 — Honda's run forever. There parts aren't terriblely expensive like a BMW. If you treat them with care and keep there fluids clean and topped off they will serve you right. Read more

The 1983 Honda Civic seems to be the first time that owners actually voiced any complaints — and those are today's complaints. Drivers find that the lightness of the Civic (about 1200 pounds) makes it difficult to get good road traction and other complain that it rusts (well, after 24 years, it's hard to expect otherwise, I'd think).

The Civic S was introduced in 1983 to begin competing with other sportier cars. The '83 Civic S had a rear stabilizer bar for firmer suspension and announced itself with an encircled S so everyone could tell that you had the best and newest and sportiest little Civic.

Used '83 Civics are considered by lots of used car owners and buyers to be the "best transportation bargain on the planet." And, if you look hard enough you can still find some decent ones for sale. Also, if you're handy, there are loads of spare parts and repair manuals to be found online.

Have you driven a 1983 Honda Civic?
Rank This Car

What Year Honda Had A VERY Small Civic

My friend had a Civic, very small, I also look for Hillman Imps, Corvair Monzas,

How Do I Prove The Value Of My Car To An Insurance Company When There Has B...

I got into an accedent and it was the other guy's fault. Now I am haggling with there insurance company to prove my car is worth more than $800.00.

how do I access bottom bolt(s) on starter? special tool?

One owner little old lady> She needs to sell

How Do I Find My Redline?

I'm putting a tachometer in my old Civic, but I don't know what the redline is because it doesn't have a stock tachometer.