Average user score
3 ⁄ 5 stars
Based on 2 reviews
I Love My 1980 Civic 1300 Hatchback by paolog — My 1980 Civic has 59K original miles and it still looks great and runs great. The 4spd manual has an extremely low 1st gear and the 12in rims help a ton for the low end torque. The 1335 cc motor is ... Read more
1980 Honda Civic Hatchback by Carlo — I bought this "beater" for the sole purpose of commuting between the train station & work. I wouldn't care if someone would be stupid enough to want to steal it while it was parked at the station all ... Read more 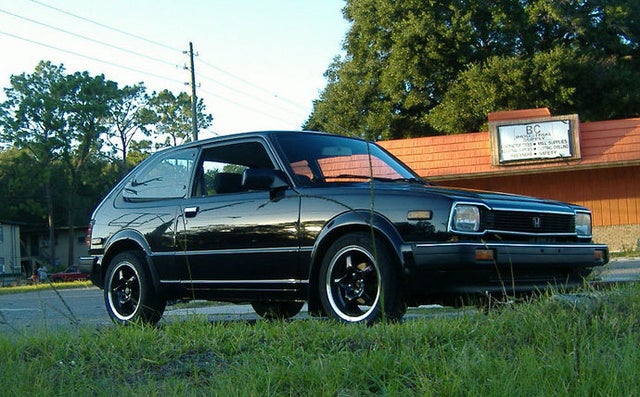 The second generation of Honda Civics has arrived.

The 1980 Honda Civic brings a new design, ushering in the new generation. The wheelbase has increased in both the hatchback and wagon to 88.6 inches and 91.3 inches, respectively. The two-door sedan, where people had to really fold themselves up to get into the back seat, has been discontinued.

In addition, the '80 Honda Civic come with a choice of three transmissions: 4-speed manual is standard, but you can opt up to t 5-speed manual or their consistent 2-speed automatic.

There are still owners of the 1980 Civic. They are still driving it; they still love its reliability and gas economy and most hope their little Civic never dies.

GuruBCQ1N Drove ours on more road trips than all subsequent wagons; two bikes on top, climbing and camping gear for two on multi-week, 1500 -2000 mile trips, avg. at least 32 mpg. Personal next-favorite car after 94 Legacy GT wagon (non-lifted precursor to Outbacks). The lack of interest in the sensible logic behind such vehicles, versus bloated giant phallus pickups mostly catering to non-working class posers, and the utter dearth of significant higher mileage vehicles aside from hybrids despite 40 years of engineering advances only demonstrates why humans are the first species capable of self-extinction.

Have you driven a 1980 Honda Civic?
Rank This Car

Any ideas where I can get a full exhaust system for my 1980 Honda Civic please. Ray