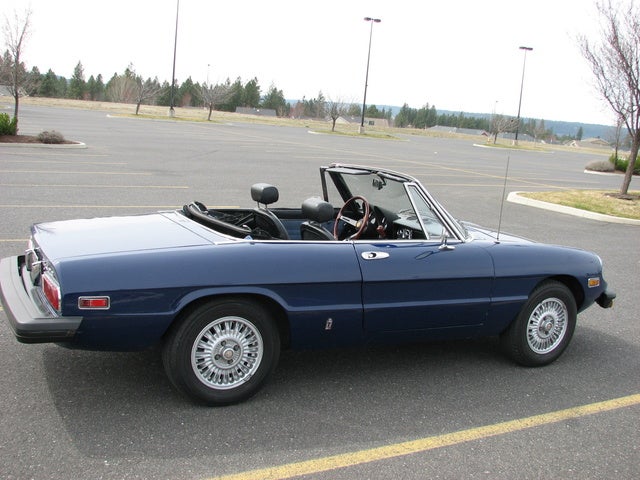 Have you driven a 1977 Alfa Romeo Spider?
Rank This Car

A Perfect Car For Speed-lovers Who Are High On Cash! By Zaid

The 1993 Alfa Romeo is a powerful yet beautiful car which is the dream of any car lover.It may be old but it can get any man crazy about it!It is quite expensive to maintain so you should be rich to h... Read More

The listing appears to be informative and accurate. There were some supporting documents. Read More

hard to get b bed disign in the tail secion , alot of to drive .. Read More

Don't Tell Me About Vroom, Vroom. By davedillon

My second Spider. I love these cars even if they don't always love me back. Our relationship is complicated, but deep. My wife talks about getting a Miata. I don't think she understands me or being... Read More

Most enjoyable ride in a car. Very quick, can take any corner at any speed, and the most beautiful lines. The most fun and classic. Alfa Romeo is the most passionate car manufacturers and holds a hi... Read More

unique and fun to drive. Does not move on snow or ice. This is not a safe car, it's a fun car. I feel safe and in control because I enjoy shifting and manuevering. Not a family car, a little roadster Read More

Overall, I would do it all again. This car is known for its second gear grind (they all have it) Although this fine feature can now be easily repaired which is my next step. Parts are easy to come by.... Read More

Top Notch If You Know What You're Doing By Tim

The Alfa Romeo is a delicate breed with a prestigious history. The Quadrifoglio Spider is a terrific show car. Performance is fair, given it is not intended to be raced, yet enjoyed. Not a daily drive... Read More

Have you driven a 1977 Alfa Romeo Spider?
Rank Your Car →