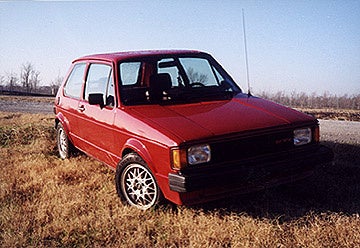 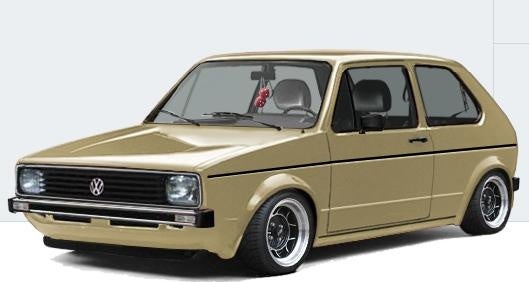 In 1975, Volkswagen launched what it hoped would be a successful successor to the Beetle, whose popularity had started to wane by the mid-1960s. Called the Golf in the rest of the world, the new vehicle was dubbed the Rabbit for the U.S. market. Sporting an angular appearance, thanks to a design by famed Italian automotive designer Giorgetto Giugiaro, the Rabbit was distinctively different than the Beetle, and it would prove the success VW needed.

In its first year of production, the Rabbit was available as a either a two- or four-door hatchback. It was a front-wheel-drive vehice powered by a 1.5-liter. water-cooled four-cylinder engine that generated 70 horsepower. Top speed was 93 miles per hour, according to Volkswagen. A four-speed automatic was standard, while a three-speed automatic was available as an option.

With a length of 13 feet, the Rabbit was actually 5 inches shorter than the Beetle. But because VW turned the Rabbit's front-positioned engine sideways, there was plenty of interior space. Among the Rabbit's features were a driver's seat that adjusted to 18 different positions, padded sunvisors, four-wheel independent suspension, and rack and pinion steering. Options included air conditioning, a roof rack, bumber guards, a rear window defogger, and a wood-panel dashboard.

Despite its lackluster engine, at least by today's standards, the '74 Rabbit was still highly rated when compared to its competitors, with reviewers citing its balance, handling, ride, and quickness as positive points.

What's your take on the 1975 Volkswagen Rabbit?

Paulette We owned one it was a nightmare engine seize at 360000 rebuilt car by time it was 4 years went into class action law suite it rusted out its dealers were hard to deal it was towed to every v w dealership in Delaware Valley , went to office I King of P rustic pa 1 year old car that did not run and old german man ask what did we want (a car that runs) we did get a settilmemt of 1.000 dollars we put out for engine may I add we wad a 63 bug loved it totaled in 1973 bought a 73 bug gas millage went from 29 miles with 63 bug 73 bought new bug millage went to 17 miles p g traded in for the rabbit we have since only buy Toyota great cars and services.

Gregg I loved that car. It was my first new car, and the tech it offered seemed phenomenal. All the cheap little sedans were rear wheel drive at that time, and the VW was so forward by offering FWD. Little did I know that all manufacturers were going to go to FWD, rendering it within a few years to be the cheap choice.

Billy I wished they still made the car just as it was in 1975. Mine got 40mpg 33 at its worst. I had friends of mine that went over 260,000 miles with them longer if they changed the timing belt. I even built my house with my 77 rabbit pulling a trailer with 4,000 lbs of drywall a tandem axle trailer. On a nice long toll road you could cruise over 90mph for hours, a friend of mine had a dasher he drove over 90mph most of the time. Great cars . Today I drive a Vw tiguan had a 2012 and traded it in on a Wolfsburg edition 2017 model, they are the best yet from VW. Just wished I would have invested in a VW van years ago when they were available. Today people would like to see a small economy car that gets over 40mpg to drive to work and back.I know I would. VW changed the auto world to front wheel drive. Dr. Porsche even worked with front wheel drive but the technology wasn't there yet for production. Same with electric his electric vehicles, ahead off their time but not practical for production. YEP I miss my Rabbit.

GuruC1M9D 1975 Gas VW Rabbit. My first car. Worst car ever!!! VW produced the rabbit knowing substandard materials and workmanship were major problems bumper to bumper. VW should have been forced to buy back at full price all 1975 gas rabbits and pay huge penalties. The rabbit was a disposable car after just 1 year. I had mine for 4 1/2 miserable years. Shame on you VW.

GuruNV47Z The ABSOLUTE worst car I ever owned. EVERYTHING that could break down did. The tranny, the radiator, the carb., the muffler, the radio, the clutch, the brakes..ALL broke down in the just TWO years I owned this POS car. It spent most of its time either on a garage rack, or parked in my driveway. I paid $1,200 for it almost new. A teacher sold it to me. He, too, was a POS! I must say it was comfortable to sit in, but THAT'S ALL!

GuruKG796 My 75 rabbit was crap. the window crank failed after 3000 miles, the catalytic converter crapped out so many times, the dealer removed it. It rusted out so fast after one winter, i was amazed. the interior started peeling as the glue started to fail. Amazed VW stayed in business after this fiasco.

Have you driven a 1975 Volkswagen Rabbit?
Rank This Car

What was the bad part of getting a 1975 VW Rabbit?