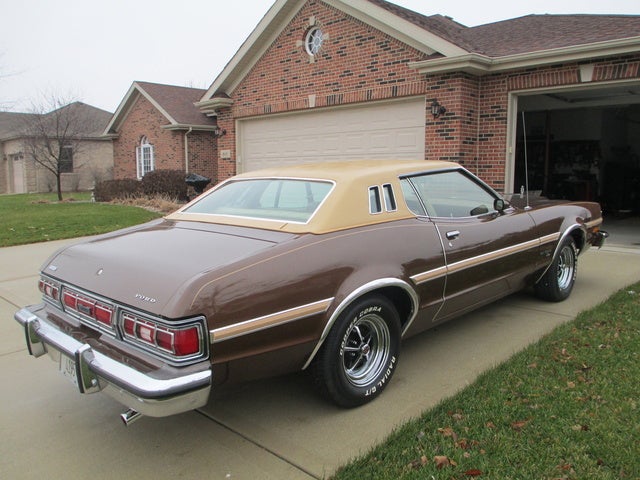 Have you driven a 1974 Ford Torino?
Rank This Car

It's Quick With A Few Bolt Ons And Very Reliable.it's A Head Turner And Rare . By migration_ftac

When I bought this vehicle in 1999 I did a few improvements to the engine and interior.It is now to my liking and a headturner.It is a show car and fully original except for paint, wheels and sport bu... Read More

You Always Love Your First Car By Payton

The best thing about this car was the 351 Windsor Engine and the set of glass-packs I put on it. It drove like a boat, but a gorgeous sounding boat. It was a great party barge as I could fit a bu... Read More

it brought back memories of when i was young liked the ford sports cars and this was a great example of a duel purpose ride drives great just floats on the road steering is tight and really responsive... Read More

Performance - this has a 351 Windsor, c4 with a shift kit. It is going to perform much better this year because I am totally rebuilding the entire drive train. Build Quality - This car is built to las... Read More

The Car Is Perfect For Anyone Looking For A Car With Good Looks And A Cheap Price Tag. By KWags

The only real negative is a lack of parts for the car. They just don't re-pop parts for 1972 Gran Torinos. the mechanics are no problem but finding trim or body pieces is a Herculean task in and of it... Read More

This Is My First Car And It Was A Good Choice. By The_rok72

I like how it was a tank of a car, yet it was still agile and quite fast. Plus the seats are very roomy and comfortable so I can fit fifteen of my closest friends in there if I had to. Read More

It's Part Of The Family By ctct01x

Fun car I've had since 1976. The car goes pretty well with a 351C 4V and a hurst shifter. Stopping is reasonable for the times with large drum brakes. The car holds 5 adults in it with no problem , pr... Read More

It was my first Performance Car. It was loved by all. A Great Car & got me to work. She was Red with a Black Vinyl Top. Black cloth interior. Automatic transmission. But it had it's Moment. It did not... Read More

Rusted To Hell, But Great First Muscle Car. By Justin

Really liked the look and sound and size. Didn't like the rust and gears out back. Got really sketchy on the highway if you went too quick. It would start to sway and get really twitchy (later my dad ... Read More

Has Beautiful Lines, Solid Drive Train But Long Way To Go On Body/interior By new2muscle

The overall impact of the shape of the car and the sheer power of the 351 bring lots of satisfaction. Finishing the bodywork and redoing the interior will do even more. Thinking about painting her a "... Read More