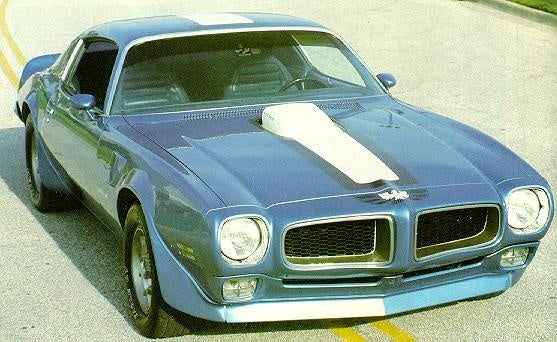 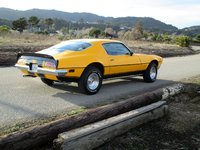 You don't have to be an astrologer to know that the stars were just not aligned for the 1972 Pontiac Firebird. A series of unfortunate events almost led to its early demise. Lagging sales, government regulations which cut its horsepower ratings even further, the approaching end of the muscle car era in the face of a looming gas crisis, and a plant strike all struck at the Firebird's shell. Like its Russian namesake, the Firebird's journey had been rough and strewn with hardships, but if GM stuck with it, the rewards and benefits would be handsome.
The 1972 Firebird came in four coupe models -- base, Esprit, Formula 400, and Trans Am. Because GM thought it might get rid of the Firebird, there were few changes in 1972, aside from engine downgrades. New horsepower regulations would allow nothing over 300, so the recently introduced 455 in the Trans Am (optional in the Formula) was officially rated at 300-hp instead of the high output 335, though it could be easily retuned. The 350 V8 in the Esprit, which once got 215-hp, was now demoted to 160-hp, less than the base model I6's 175-hp. It seemed the street racer was losing its credibility quickly.
There were other minor cosmetic changes. A new honeycomb grille matched the honeycomb wheels, and new vinyl interior upholstery was offered. 1972 would be the last year for the Trans Am stripes, which wouldn't reappear until 1984. Production numbers were very limited this year, thanks to a plant strike. When work resumed late in the year, GM unfortunately threw out many already-built pre-strike models, knowing they wouldn't comply with the following year's standards.

What's your take on the 1972 Pontiac Firebird?

Have you driven a 1972 Pontiac Firebird?
Rank This Car

What Chassis Fits In 1972 Pontiac Firebird?