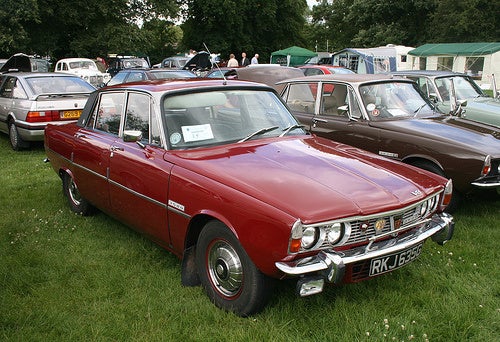 The Reason Rover No Longer Exists By Cameron

I have driven several Rover SD1s – and they are linked by two defining characteristics. One is the legendary Rover V8, a gem of an engine (in the right state of tune). The other trait is that they’r... Read More

What a classic! One of my favourite cars of all time, only a Jag drove better in my opinion! I had a 2.6 Vanden Plas which was absolutely gorgeous inside, it was like driving a gentlemans club around!... Read More

The Rover Sd1 Vitesse By Andy

Epic Perfomance with good brakes and suspension, The build quality wasnt bad but some of the materials used in the interior dont stand the test of time well. Engine would go on and on if it wasnt for ... Read More

Just A Fantastic Car To Drive. By Terry

The best care that i have in my fleet it has a 4.6L V8 powering it and eats up Km's like no tomorrow it is a car that you can just cruise around in all day and you don't never get tired of driving it ... Read More

The ultimate police car of the early 80's... went like stink. I had one of these in met blue. lovely motor so much space biggest car ever had..bigger than my 3 series by amile. downside....15 gallon t... Read More

thead rests were massive in these cars,speedo went to 150 on the dash yet I remember driving london to liverpool one xmas eve in mine in just over 2hrs, at one point my trip computer was averaging 151... Read More

It Was A Nice Car To Drive. Quiet Until You Floored It Then It Was A Tail Happy Demon. Great Fun To By Richard

Very fast in it's day. 3500cc V-8 with a Borg-Warner 3 speed auto. Very comfortable to drive. 30mpg on a run; approx 22mpg around town. Cheap to repair considering it's age. Mine had twin carbs but la... Read More

Fast-ish Timeless Classic With An Exceptional V8 Engine! By Will

Just looking at this lovely car (design taken from the ferarri daytona) its a classic! With a lovely comfortable interior with all the gauges you need. Performance is good even by todays standards. ... Read More