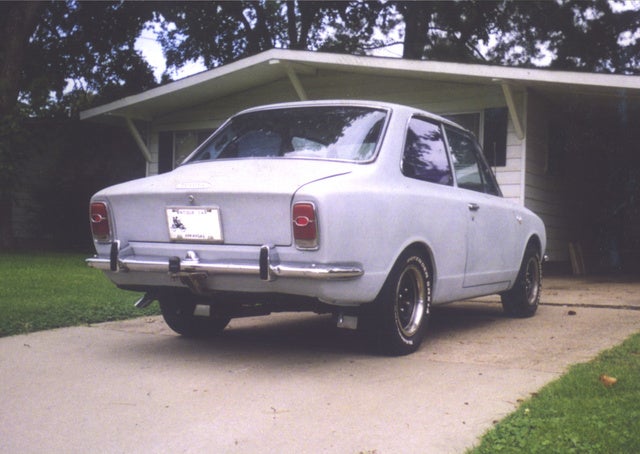 The 1969 Toyota Corolla was only the second year the car was sold in the US, although it had been selling in Japan since 1966. The beauty of the early Corolla was in its simplicity. It was not a sophisticated car, but that also meant there were few things that could go wrong. The 1969 Corolla was very small and not particularly stylish. It was available as a two-door coupe, a four-door sedan or a two-door wagon.

The 1969 Corolla came with a four cylinder, 1.1 liter 60 horsepower engine. The only option for the transmission was a four-speed manual.

Toyota hoped that the 1960s Corollas would prove to Americans that Japanese cars were not of inferior quality compared to American-made cars. However, the 1969 Corolla proved to be too small and underpowered for US drivers, and sales were slow until the Corolla was redesigned the following year.

What's your take on the 1969 Toyota Corolla?

gaffrig My '69 Corolla was my first Toyota and I've owned nothing but Toyota's since. I paid $1,679.00 (including tax, title and license) and drove it 75k miles before trading it on a 1970 Celica. The Corolla was my introduction to a well engineered car that was affordable and reliable. I would love to have it now.

Have you driven a 1969 Toyota Corolla?
Rank This Car

Where To Find Parts

Where can I find a parts supplier for the 1969 ke-15 corolla sprinter. Body parts, electrical, chasis.?

HELO MY NAME IS GILBERT FROM CONNECTICUT AND I WANT TO BUY ONE CAN YOU CALL ME?GILBERTOC@MCCUEMORTGAGE.COM

What Is A 69 Corolla Worth Today?

what would a 69 toyota corolla be werth today?

Do You Know Who Is Selling A 69 Corolla?

I'm Looking For A New Clutch Set For My 69 Corolla