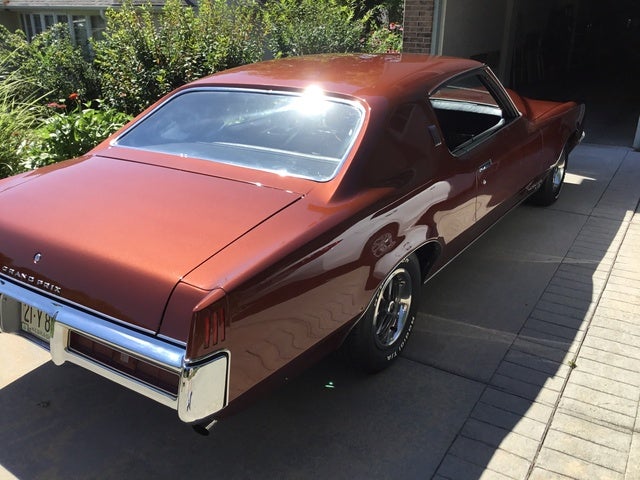 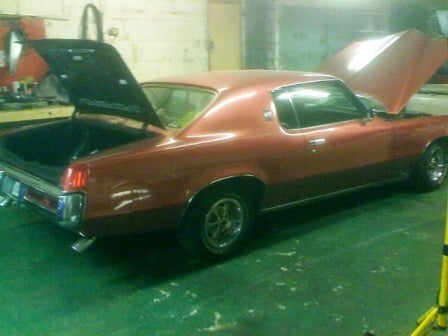 Having grown larger in size and smaller in popularity over the last few years, the 1969 Pontiac Grand Prix went through a major styling overhaul at the hands of John DeLorean. Built on a new platform distinct from the Catalina, the 1969 Grand Prix was actually smaller in length, though with a longer wheelbase for better handling. Now more of a mid-size coupe, the emphasis was on reviving its luxury personal performance car status.
Still sporting a Coke bottle shape, the 1969 Grand Prix had a unique arrow-like grille that pointed sharply outward in a V-shape at the end of what was billed as the longest nose in the auto industry. At six feet long, the combination of long hood with a short rear deck took its styling cues from the Duesenberg. As further nod, the 1969 Grand Prix also adopted similar trim names. The base J model featured either a 2-barrel 265-hp or 4-barrel 350-hp 400 V8, paired with a 3-speed manual or automatic. The more luxurious SJ came standard with a 428 V8 rated at either 360 or 370-hp. A high output version came in at 390-hp. It also offered an auto-leveling suspension, Rallye gauges, white-trimmed tires, and SJ badging.
A unique curved instrument panel literally wrapped around the driver in a cockpit style, with all gauges angled convenience. The center console, bucket seats, and floor shift remained intact. New options included a rear defroster and leather seat trim. One other highly touted innovation was hiding the antenna inside the windshield, leaving the exterior uninterrupted.
The 1969 Pontiac Grand Prix helped reinvigorate GM's luxury car market, while still retaining Pontiac's focus on performance and street racing. The Grand Prix actually won the Engineering Excellence Award from "Car Life" that year, but it was also a huge success with drivers, with sales more than tripling those in 1968.

What's your take on the 1969 Pontiac Grand Prix?

Have you driven a 1969 Pontiac Grand Prix?
Rank This Car

I Am Looking For The Length Of The Stock Driveshaft On A 1969 Pontiac Grand...

I have a 69 Pontiac Grand prix without a driveshaft. I need to know the stock length of the drive shaft?

What Keys Unlock Which Locks On A 1969 Pontiac Grand Prix J Series?

I Have A 1969 Grand Prix And The Wiring To The Altenator Fried And I Need T...

I have seen 1969 Pontiac GranPrix grilles with a 428 emblem on them. Do you know where I could find one of these?