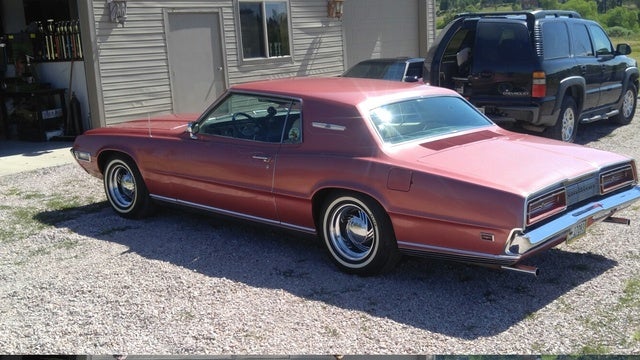 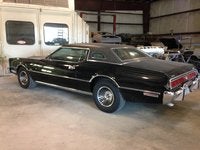 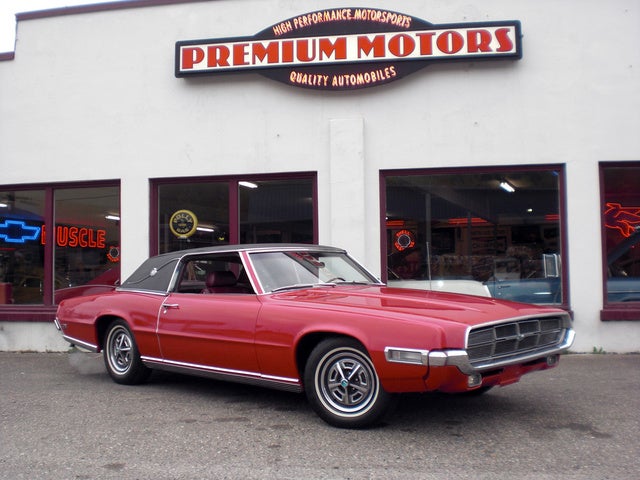 The 1969 Ford Thunderbird saw few changes from the previous models of the 'Glamor Bird' years. The rear end got a bit of a cosmetic makeover, with a move to individual taillights rather than the cross-chassis bar light. The other main tweak to the look of the '69 Thunderbird was the introduction of a sunroof option.

The T-Bird was still a bit lost, as a brand identity, in 1969. The hot-selling Mustang had displaced it as Ford's flagship two-seater sports runabout, and the folks in Dearborn had been nudging the TBird ever closer to the 'luxury car' market segment since its 1967 redesign and upsizing. Despite the suburban accoutrements, though, most of the people who sought out the '69 Ford Thunderbird were looking for a performance sports car with plenty of muscle under the hood.

And that's where the 1969 Thunderbird really shone. Ford shipped the '69 T-Bird off the line the big 7.0 liter/429 cubic inch 360-horsepower engine introduced as an option the previous year. The impact on the dragstrip and the stock circuit was immediate!

If you can find a 'Glamour Bird' today, you've got a project to content you for years. Some might even call it an obsession. In any case, the 1969 TBird is more than just a car: it's a gorgeous piece of American automotive history.

What's your take on the 1969 Ford Thunderbird?

69BirdFlew I recently purchased a 1969 Thunderbird coupe with a 429 sight unseen from an estate sale. It turns out to have been garage kept since new and has A/C, Cruise control, and has nearly perfect interior. The car has been in one family since new and has 93,000 original miles on it. I am in love to say the least

Have you driven a 1969 Ford Thunderbird?
Rank This Car

Step By Step Instructions On How To Replace The Neutral Safety Switch On My...

This is my first/last project car to keep forever. Learning as I need to. 429, non tilt wheel, auto on the wheel. Starts when I hold the gear shift just right but doesnt stay running. Next step. Fuel ...

What Size And Where To Buy Rims For 1969 Ford Thunderbird

need to replace the hi maintenance rusty kelsey's - what do i ask for when searching for rims? i'm wheel ignorant - help

What Is The Location Of The Voltage Regulator?

Where Can I Find Armrests For Interior Doors On A 1969 Thunderbird?

How Do You Open The Trunk Of A 1969 Ford Thunderbird Without A Key Or Power...