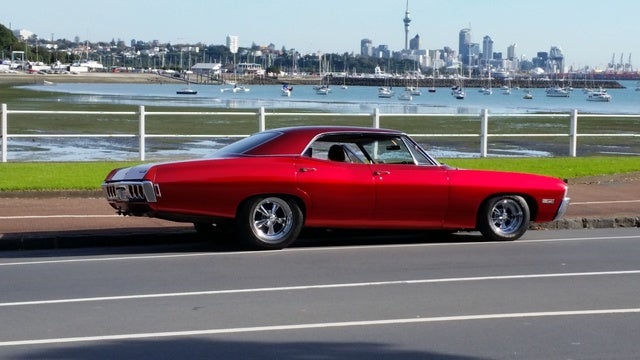 Remember when the SS was an option package, way back in like, 1963? Well, it became one again in 1968. The look was much smoother than previously, due in large part to a new technique of creating body shapes adopted by Chevy which involved creating a wire frame, covering it with cloth, then blowing it out to create a softer appearance.

Sales dropped to 38,210 in 1968, and could not be saved even by the wicked 427-ci V8 SS, capable of 425 horsepower and 460 lb-ft of torque. A favorite modification to this car by taking the dual 4-barrel and creating a triple dual barrel. This would boost the horses to 600. Six hundred horsepower.

What's your take on the 1968 Chevrolet Impala?

Have you driven a 1968 Chevrolet Impala?
Rank This Car

I have an all-original '68 Chevy Impala fastback 2-door hardtop with factory four speed, bench seat with a 327 engine. Want to find out value range as I want to restore, and need to know just how muc...

I believe they're identical, but im not sure if I can use the 67 fastback doors on my 68 convertible impala. Does anyone know for sure if they would fit?

My Carborators Is Leaking Is There Another Reason For It?

I've had 2 carborators start to leak fuel from them one we thought it leaked because it was old but the 2nd one we bought off summit and it began to leak again. Is there a possiblity that there is ...

Does Anyone Know A Good Site Where I Could Find Parts For A 68 Impala Cust...

I have a1968 Chevy Impala 2 Dr Custom that I am trying to restore but am having trouble finding parts for it. (i.e. window trim, mouldings etc.) I spoke to a rep from ClassicIndustries.com and he said...