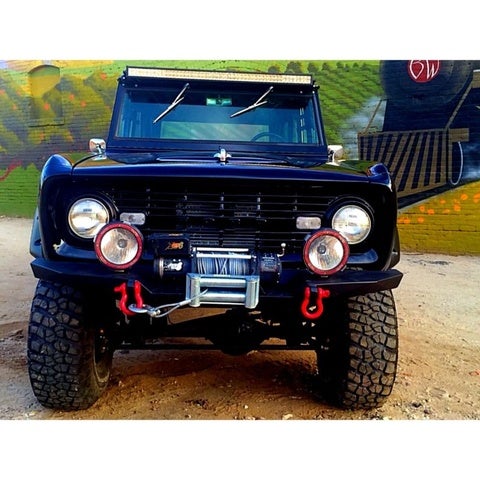 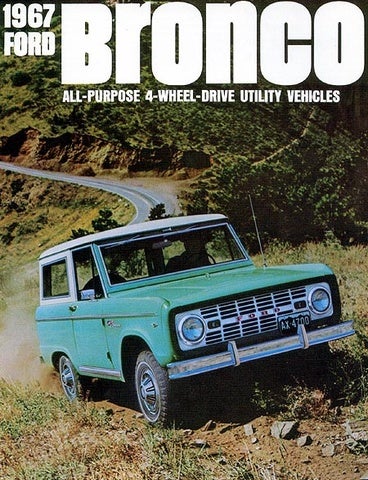 Ford introducted the Bronco in 1966, correctly anticipating that the four-wheel truck fad would catch on and last awhile. Product manager Donald N. Frey, who dreamed up the Mustang, and engineer/designer Paul Axelrad started with the Ford F-100 truck, using its axles and brakes and conventional Hotchkiss leaf-spring rear suspension. Axelrad then changed the front axle to accomodate coil springs; this, with the Bronco's mere 92-inch wheelbase, made it possible for the
truck to execute tight turns and handle more responsively than other 4WD trucks of the day.

Anti-dive suspension and a somewhat clumsy shift-on-the-fly transfer case (still in its infancy) and a carburetor with a float bowl designed to accomodate tilting were just a few of the innovations incorporated into the Ford Bronco. Ford was competing with the Jeep CJ-5 and International Harvester Scout with its Bronco. The original Bronco engine was the Ford 170-cubic-inch I6, which Axelrad fitted with solid valve lifters and other modifications to make it a powerful, tough, go-anywhere through-anything truck.

The 1967 Ford Bronco was unpretentious; plain, simple, boxy, tough(although Ford did introduce a "sports package" option that year). People didn't buy it for a pleasant ride. Its owners were aching to explore off-road, and it was very good at that. It did have a few recall problems, though; they involved steering linkages, brakes, and hydraulic pedals and linkages.

Chieftain_2619 I happened to own a 1967 Military Issued Bronco. The sierra navadas is our back yard and "yes", bone stock it will go just about anywhere.

Have you driven a 1967 Ford Bronco?
Rank This Car

How Much Does A 1967 Bronco With A Winsor Engine In It?