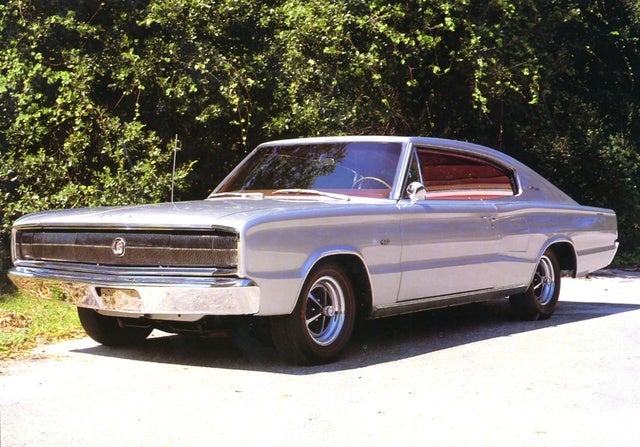 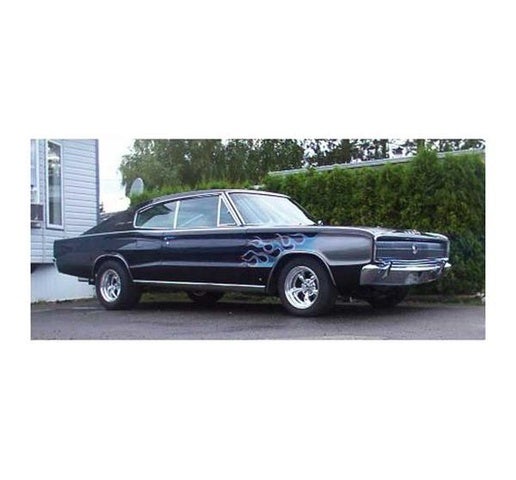 On January 1, 1966, at the Rose Bowl in Pasadena, California, Chrysler unveiled its first entry into the fastback muscle car market, the Dodge Charger.

Based on the Dodge Coronet, it was virtually identical, except for that trademark fastback roof. Like the Coronet, the two-door Charger was big, 22 inches longer than the Mustang. The car was made for speedsters, so all models were V8. Why bother with anything less? The Charger came standard with a 318, 230-horsepower, 2-barrel engine, whose weak performance didn't match the look of the car. Better options were the 361, 2-barrel, 265 bhp or the most popular 383, 4-barrel, 325 bhp. A 3-speed manual or Torque Flite tranny came standard with the 318, while the bigger engines were paired with a 4-speed manual or Torque Flite.

But the biggest engine of them all made its street debut with the Charger. The 426 Hemi V8, rated at 425 bhp (but reaching 500 bhp) existed only on the race car circuit prior to the Charger. Its inclusion in the Charger turned this car into a true street racer.

And a great look to go along with the great engine. Carl Cameron designed the exterior, adding to the fastback roof full-length taillights and a full-length convex grille. The headlights rotated open or closed. Inside were four bucket seats with a front-to-back console in between. The rear seats even folded down for more cargo space. Also unique to the Charger was its instrument panel -- four sunken pods lit by electroluminescence.

Mark Thank you for the article on Chargers. I have owned three: a red 383, a black 426 hemi, and the car pictured above is MY car, which has the 361 2bl engine AND it is for sale on cargurus. This silver car has only 49,900+ miles on it, with dark blue interior. These cars are gorgeous to me, and I hate to let it go, but someone will be very pleased at how the car drives and handles.

66 i love these cars two,i have owned 4 of them since 1979,the one i have now,has a 361 with all matching numbers,including the original certi card and owners manual that came with the car,i love my charger,every time i go for a cruze,it really feels like i am driving something very special,which i am.long live the 66 and 67 chargers!

Guru9BGWFV I have owned my 66 charger for over 20 years. I admit it is a garage king and only makes it out to the car shows. The 440 powers this Black lacquer and original red interior which sits on craiger 5 spoke chome rims wrapped with BF Goodrich T/A's with raised white letters of course. Never going to sell and will be buried in it one day.

Have you driven a 1966 Dodge Charger?
Rank This Car

Will A Deuce And A Half Engine Fit In A 1966 Dodge Charger Engine Bay?

How Much Is A Yellow "original Paint" 1966 Dodge Charger Valued At? Has Cle...