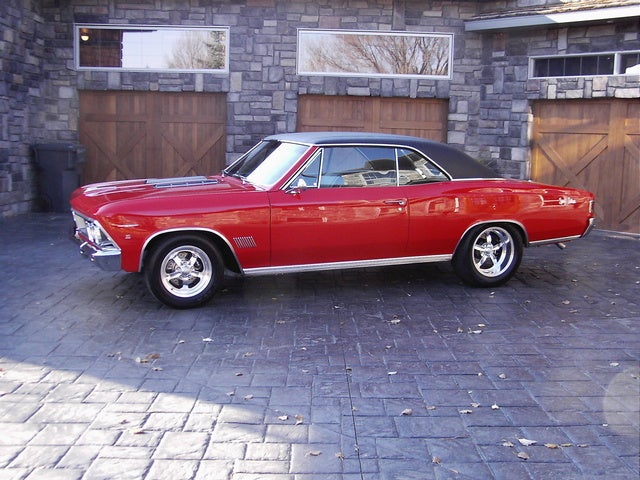 Have you driven a 1966 Chevrolet Chevelle?
Rank This Car

Excellent car. I have owned my SS since June of 1973. It has been a very dependable car, has left me stranded only once in 37 years. Gas mileage 18 on trips. The kids at school love my car. Many of t... Read More

awesome bottom end torque, nice shift quality. good ole american car it would be nice with a supercharged 454 but the 350 will do for now, i might do some tuning this winter, also need new super fat... Read More

Not For Sale By chvymann

Rebuilt to be a GO QUALITY not a SHOW QUALITY...we have enjoyed it much these nearly 6 years...WOW! The mild 350 is easy on the gas tank pockbook while mantaining the muscle! PLUS A/C adds to the mode... Read More

One Of My Top 3 Muscle Cars. By firechicken2001

This car is amazing. Get ready for the looks, the stares, the shouts, the fun. It's all here. Ever wonder what it"s like to be a rockstar? Hop in this car and drive down the road. Bring a pen and... Read More

the best project learning process. allot of welding lots of fun time money just rebuilt motor dynoed at 825hp and 1000 ft of torque at the crank i also have a turbo 400 with trans brake and trick shif... Read More

This is all steel,back when cars were made of pure steel.Like they said,there is no substute for cubic inches.No ECM no computer brain,if you got fuel and spark it will start and run all day long.You... Read More

Was an awesome car. Not really the best car for a 16 year old driver, but it was the 70's. Would leave rubber all the way through 1st and half of 2nd gear. First ticket was received the night I p... Read More

the looks are there fast drives easy p/s p/b m21 4sp trans shifts great gear ratio is close super shifter w/lock out on rev the sound the interior needs a head liner in stalled the seat are orig,but ... Read More

CarGurus has 261 nationwide Chevelle listings and the tools to find you a great deal.

Have you driven a 1966 Chevrolet Chevelle?
Rank Your Car →