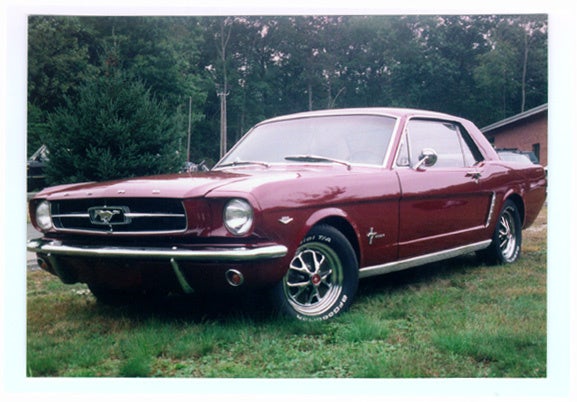 1965 brought a few changes for the Mustang. The biggest change was the availability of a new fastback model, which was to become the basis for Carroll Shelby's GT 350. The 120-horsepower, 200-cid, 6-cylinder engine replaced the 170-cid, 6-cylinder; the 289-2V, 200-horsepower V8 replaced the 260-2V; the 289-4V was upgraded to 225 horsepower; and the 289-4V hi-po remained unchanged. Other changes for 1965 included: an alternator instead of a generator, relocation of the oil filler, integral power steering pump and reservoir (most 64.5's had a remote-mounted reservoir), a wire retaining ring was added to the gas cap, the horns were smaller and relocated, and the interior carpet was continued up the sides of the rocker panel and under the sill plate.

A new interior option was added, the interior decor group (known as the pony interior), which featured special seat covers with running horses across the back, special interior door panels with integral armrests and pistol-grip door handles, a five-gauge instrument panel, woodgrain steering wheel, and woodgrain appliques on the instrument cluster, glovebox, and optionally on the center console. Another option introduced in April of 1965 was the GT equipment group. Available only with one of the two four-barrel engines, the GT group included five-dial instrumentation, disc brakes, larger sway bars, a quicker steering ratio, dual exhaust that exited through the rear valance panel, grill-mounted foglights, and special lower body side stripes. A total of 559,451 Mustangs were produced for the 1965 model year.

Users ranked 1965 Ford Mustang against other cars which they drove/owned. Each ranking was based on 9 categories. Here is the summary of top rankings.

Have you driven a 1965 Ford Mustang?
Rank This Car

Where Can I Buy A Straight Six Cylinder Engine For 65 Mustang.

Where is the best place to buy and install a 1965 straight six cylinder engine for my mustang.

My 1965 Mustang has a VIN that is short and the web site wont accept it and let me continue.

What Month And Year Did Ford Start Making The Fastback?

It is my understanding that Ford did not start factory line production on the Fastback until the spring of 1965 in San Jose,CA. Is this true? When did they first start making the car?