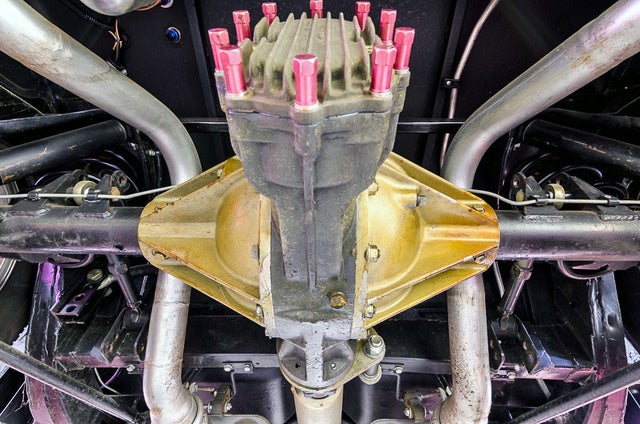 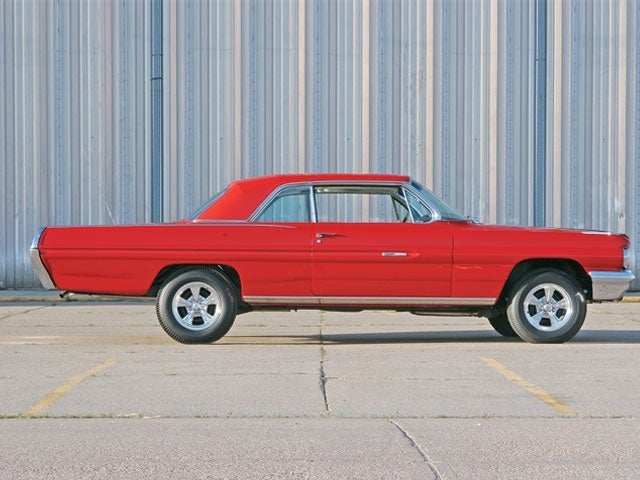 In response to the popularity of the Ford Thunderbird, Pontiac decided to produce its own personal luxury performance car, but at a lower price. Thus was born the 1962 Pontiac Grand Prix, a two-door coupe built on the Catalina platform and offering a host of standard features and powerful engines for the sports enthusiast. It was an immediate hit.
With engineering help from John DeLorean, the 1962 Grand Prix is credited with changing the styling trend from gaudy flash to simplistic exterior design. It had much less chrome and trim than previous cars, with straightforward lines, and a subtle front and rear grille that sported a small checkered flag logo. The rear also featured hidden taillights. Under the hood, however, it was anything but simple. A standard 389 block V8 engine got 230 or 303-hp depending on whether it was a 2-barrel or 4-barrel carb. A TriPower version (three 2-barrels) hit 318-hp. There was an optional 425 Trophy V8 which varied between 33 or 348-hp, and a very limited number (16!) 421 Super Duty engines maxing out at 370-hp. The 2-barrel engines came with a 3-speed Hydramatic only, but other engines could have a 3 or 4-speed manual as well.

Inside the 1962 Grand Prix, the focus was on personal comfort, with lots of great features for the time. These included a tachometer, cruise control, air conditioning, a center console, floor shifter, power windows, and Morrokide vinyl bucket seats. With a lower price tag and similar performance to the Thunderbird, the 1962 Grand Prix marked Pontiac as a significant challenger in the luxury muscle car segment.

What's your take on the 1962 Pontiac Grand Prix?

Have you driven a 1962 Pontiac Grand Prix?
Rank This Car

how do I change my generator to an alternator

I'm considering installing a tri-power on my '62 GP. Some people say the '65 TP assemblies are the way to go, any ideas? Any recommended sources for a complete assembly?