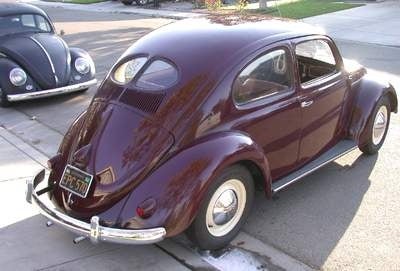 That 1951 version of the Beetle was distinguished by a split rear window (with a pillar down the center) and a new Wolfsburg crest that was added to the front hood above the handle.

Other improvements for 1951 included chrome molding on the windshield and vents added to the front quarter panels to improve interior ventilation. But the vents tended to make drivers cold, so they were discontinued after this model year. Telescopic shocks were also new for the 1951 Bug.

The car proved popular with a small group of aficionados of import cars, as well as drivers on a budget, who appreciated the Beetle's low cost, gas economy, and ease of repair.

What's your take on the 1951 Volkswagen Beetle?

Have you driven a 1951 Volkswagen Beetle?
Rank This Car

I got a custom car like a 1951 Volkswagen Beetle right now. We're sorry! It was not found.

This is a nice vintage air cooled ride runs,drives, little bit of work new inteirior needed new weeks,tires&paint straight it was a project got it running and then quit and has been sitting since...

Hi, I was wondering if anyone would know the ball park value of a mint original condition 1951 VW cabriolet, I know there was only 500 made. Thanks